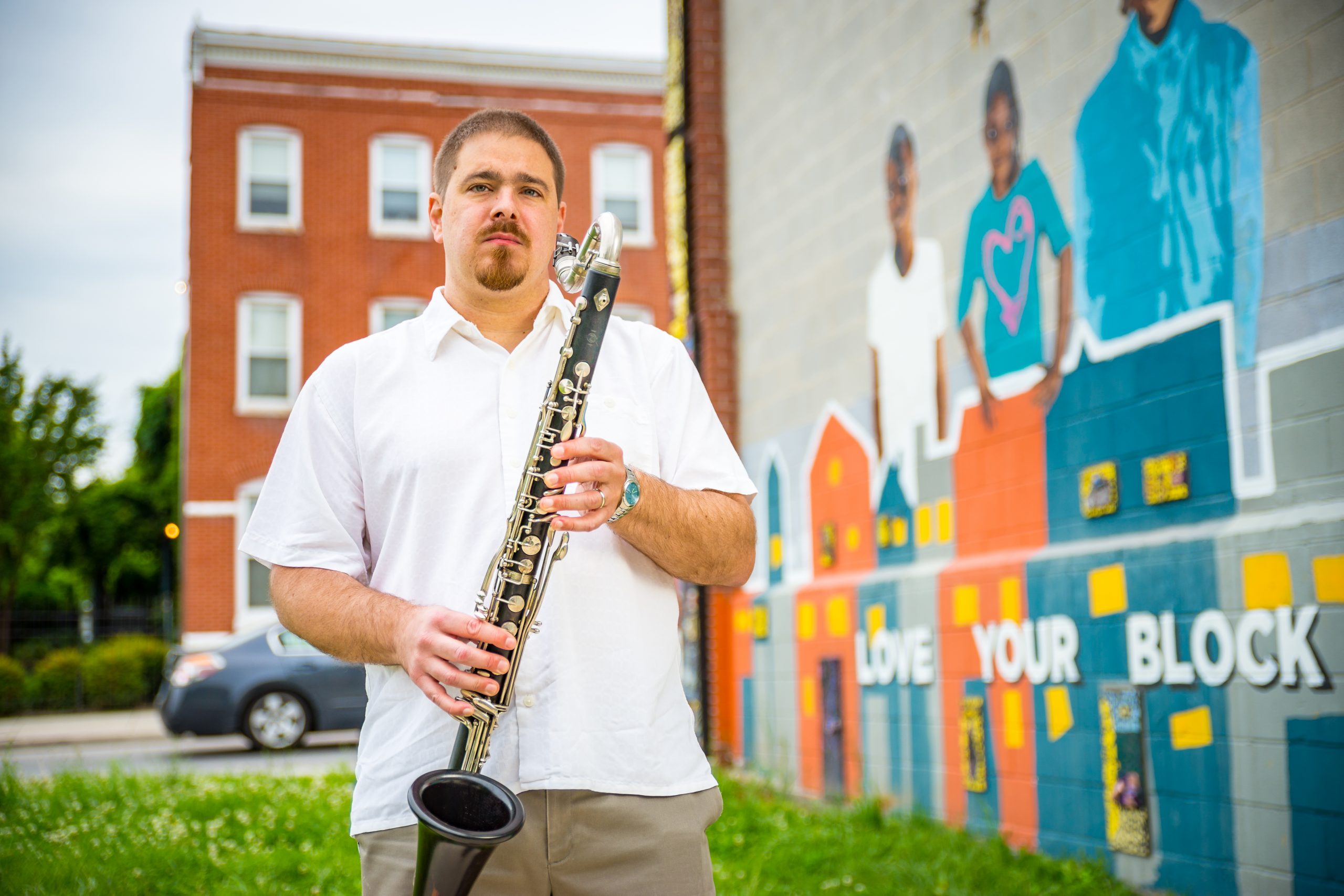 Though the use of bass clarinet in jazz typically leans heavily towards avant-garde and free-jazz styles, Marcus’ straight-ahead playing has carved out a unique voice for the instrument in modern jazz. His music swings hard with both a fiery and introspective intensity but also maintains a strong lyrical sensibility. Marcus has annually been voted a Rising Star in Downbeat Magazine’s Annual Critics Poll since 2013 on “clarinet” and “miscellaneous instrument” categories and the Washington Post writes,

“Listeners won’t have any trouble recognizing Marcus’s compelling gifts for composing and arranging.”


Based in Baltimore, MD, Marcus actively leads small ensembles such as the Todd Marcus Quintet, Quartet, Trio, and Duo as well as his nine-piece band The Todd Marcus Jazz Orchestra on original compositions and jazz standards. 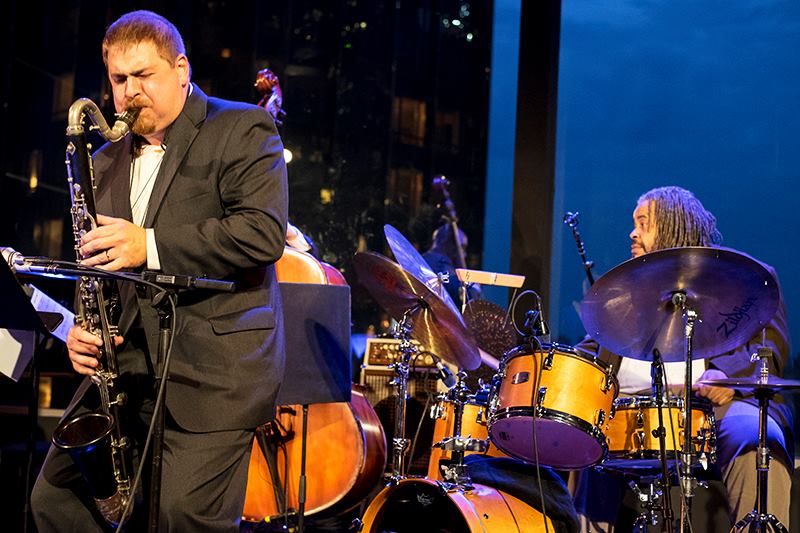 Marcus’ performances include national and international touring. He was a featured artist in 2017 Jazz Tales Festival in Egypt, 2015 Cairo Jazz Festival in Egypt, and in 2005 at the 1st World Bass Clarinet Convention in Rotterdam, Holland.

Marcus balances his music career by running Intersection of Change, a nonprofit addressing poverty-related issues in his Baltimore neighborhood. The organization runs a community arts program for children & adults, a recovery program for women overcoming drug addiction, an urban farm, and has achieved significant community revitalization by renovating abandoned buildings and vacant lots. “Mr. Marcus is probably the most inventive bass clarinetist working in straight-ahead jazz today…[and] lives in Baltimore, where he is a guiding light on the city’s jazz scene who doubles as an activist and organizer.” New York Times, August 2017

In 2018, Marcus released a groundbreaking CD that mixes Music with Activism.  The album, “On These Street”, offers a poignant perspective about the intersection of Penn and North in Baltimore.  The intersection where the tragic story and death of Freddie Gray is remembered.  Todd Marcus lives just three blocks from Gilmor Homes, the Baltimore housing project where Freddie Gray lived and was arrested in 2015. Marcus didn’t grow up in the poverty-plagued Sandtown neighborhood, but the New Jersey native started volunteering there as a 19-year-old college student, moved in two years later and is still at it as a 42-year-old activist. Today he is the executive director of Intersection of Change, a non-profit group working to improve the neighborhood’s quality of life.  See and hear more in the following video:

Check out this recent performance at Dizzy’s Coca-Cola Club in Jazz At Lincoln Center:

Todd Marcus brings to Buffalo a stellar group of headlining jazz artists in support of his “On The Streets” album.  Appearing as the Todd Marcus Quintet will be:

Guitar master George Benson, a long-time supporter, has described Bollenback’s work as “. . .bona-fide playing, unambiguous, up-front and powerful,” calling him “a versatile dynamo on guitar. His approach to jazz and blues has a uniqueness unto itself . . ..”. That comment has special resonance in that Bollenback counts Benson high among his wide range of influences; these also include Carlos Santana, Wes Montgomery, Kenny Burrell, John McLaughlin, Johnny Winter, and Jimi Hendrix (among guitarists), as well as such giants of improvisation and composition as pianists Herbie Hancock and Bill Evans, and saxophonists Wayne Shorter and John Coltrane. In 2011 Bollenback garnered a Grammy nomination for co-production on Joey DeFrancesco’s Never Can Say Goodbye (Hi Note).

Bruce arrived on the New York jazz scene in 1988, and soon joined the great tenor saxophonist Stanley Turrentine; their musical collaboration spanned a decade. Shortly thereafter, he toured Japan with Nat Adderley, and toured Europe and recorded with Vincent Herring’s quintet with Dave Douglas.  In 1990, Bruce joined the Terence Blanchard Quintet; the band toured extensively and also recorded six CDs, as well as several movie soundtracks. In 1992, Bruce played piano on-screen in Spike Lee’s Malcolm X.  While in Terence Blanchard’s band, Bruce recorded his first two CD’s as a leader, “In Focus” and “Morning Call” for the Enja label; both were chosen for the New York Times’ top ten lists.

A native of Washington DC, Ameen Saleem graduated from the Duke Ellington School of the Arts in 1997. He attended North Carolina Central University from 1997-2001, earning a Bachelor’s Degree with a major in Music Performance. He performed in the Jazz Ensemble and was Musical Director of the Choir Ball. From 2002-2005, he attended CUNY Queens College in Flushing, New York, earning a Master’s Degree, majoring in Music Performance.
Recently, Ameen Saleem has been touring extensively across the US, Europe, and Japan with The Roy Hargrove Quintet and the Roy Hargrove Big Band. 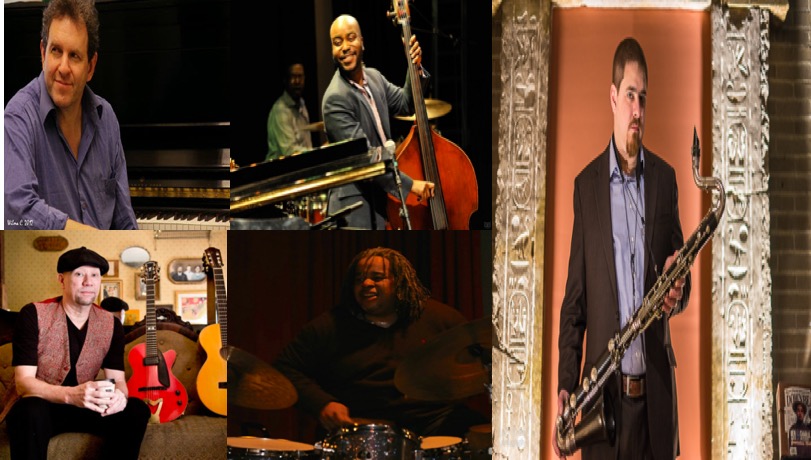 This is a rare world-class performance brought to you by JazzBuffalo, in association with Pausa Art House.  A must-see event that brings our community closer together!