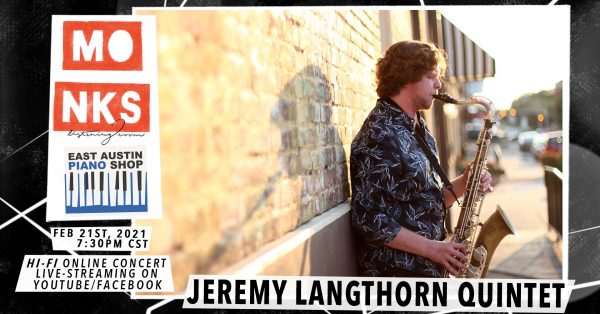 Jeremy Langthorn Music is a Texas based saxophonist, composer, and educator who spent his formative years growing up in Temple, Texas. The town’s local music scene and Temple High School’s award-winning jazz program turned Jeremy’s love of music into his ultimate career path, and after graduating in May 2013, he moved to Denton, Texas to attend the University of North Texas, where he graduated in 2018 with his Bachelors of Music in Jazz Studies (Saxophone Performance). Mentors he studied or worked closely with include Brad Leali, Jose Aponte, Carlos Averhoff, Brian Horton, Lynn Seaton, Pat Coil, Rodney Booth, and Dr. John Murphy.
In addition to school, Jeremy quickly became an in-demand sideman and band leader around the Dallas-Fort Worth Metroplex, where he maintains a performing schedule. Projects Jeremy has been affiliated with include Jamsara (who’s self-titled album “Jamsara” can be found on Bandcamp), Chris Watson’s Retrophonics, RC and The Gritz, and The Jeremy Langthorn Collective (who’s EP “Jeremy Langthorn Collective – Live at The Greenhouse” can be found on SoundCloud). Before the pandemic, Jeremy was employed by Cunard Cruise Line as a member of The Royal Court Theatre Orchestra on board the Queen Victoria cruise ship. There, he performed on a number of production shows with the ship’s cast, including the musical “Top Hat”, and with a wide variety of guest entertainers from the United Kingdom and beyond. Jeremy currently plays on MacSax saxophones and mouthpieces.
facebook.com/jlangthornmusic