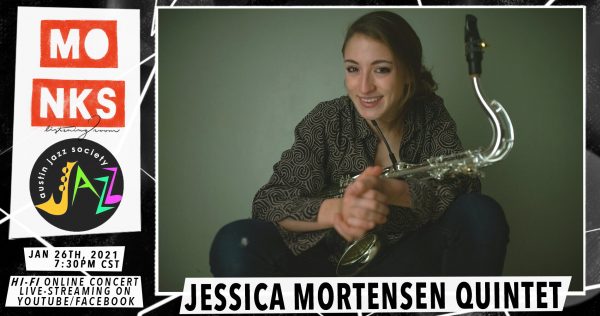 Continuing the collaboration between Monks Jazz and the Austin Jazz Society on behalf of #ProjectSafetyNet, the 33rd concert in the series will feature a quintet led by saxophonist Jessica Mortensen.

A native of the California Bay Area, Jessica was originally a classically trained pianist. Throughout her teenage years, she explored several different genres and instruments before she picked up the tenor saxophone. She pursued a jazz emphasis mid-way through high school and continued experimenting with related styles from there. From jazz to soul, fusion to R&B, Jessica’s versatility appeals to a wide range of musical tastes.

Moving to Austin for educational pursuits, Jessica earned a bachelor’s degree in 2020 in Cell & Molecular Biology at the University of Texas at Austin, while actively involving herself in the school’s jazz program as well as the Austin music scene.

Mortensen has gone on to tour the U.S. and Europe, performing at various jazz festivals including the North Sea Jazz Festival and Montreux Jazz Festival. In addition, she has performed alongside esteemed artists such as Cyrus Chestnut, Bob Sheppard, and Conrad Herwig. She has also performed at ACL 2019 with Gary Clark Jr. Jessica has performed regularly within the Austin area with groups such as Boss Street Brass Band, The Blondell Quintet, The Empire, Memphis Train Revue, The Austin Nines, and more.

Stream in HD at youtu.be/k5LgDjr9ZRk

We invite viewers to donate; contributions ensure performers get paid, with surplus funds going into Austin Jazz Society’s “Project Safety Net” – a project initiated in late March 2020 to assist Austin-area jazz musicians whose livelihoods have been affected by the pandemic. To date, the fundraising project has raised $98,000+ and benefitted 110+ individual jazz musicians.