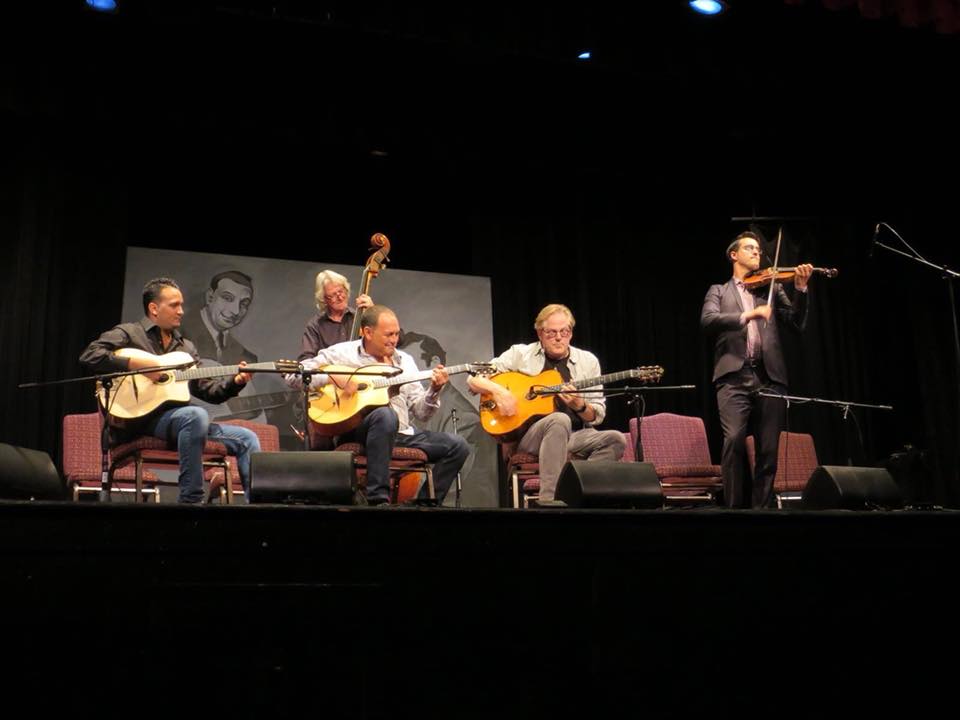 Music virtuoso John Jorgenson, known for his blistering guitar licks and mastery of a broad musical palette, has earned a reputation as a world-class musician and guitarist who has collaborated with the likes of Elton John, Bonnie Raitt, Luciano Pavarotti, and Bob Dylan. In addition to acoustic and electric guitars, he is also regularly featured on the mandolin, saxophone, clarinet, bouzouki, pedal steel, vocals and has garnered recognition for contributing to GRAMMY-winning and numerous platinum-selling albums.

Jorgenson’s newly-formed bluegrass band, featuring the legendary Herb Pedersen, Jon Randall and Mark Fain is creating quite a buzz; his Electric Band is a whirlwind tour-de-force; and his dynamic Quintet’s authentic gypsy jazz—the string-driven swing created by Jean “Django” Reinhardt and Stephane Grappelli in 1930s Paris—is recognized internationally. One of the elite gypsy jazz players in the world, Jorgenson portrayed Django Reinhardt in the Hollywood feature film Head In the Clouds.

All About Jazz has described the John Jorgenson Quintet’s performance as “a mix of soulful romance and rollicking celebration, with Jorgenson’s fingers a blur that created avalanches of notes and chords, his dazzling prowess often caused listeners to gasp at the speed and sound…” A concert review by Djangobooks also gives the Quintet’s live performance high marks, noting the compositions are “strong in a variety of styles” and the arrangements are “fresh, complicated and compelling) while adding “the show is golden and the music soars.” And NPR has observed that “John Jorgenson has insanely fast fingers – they’re nothing but a blur when he’s notes-deep into a song.”

Jason Anick, a prodigious graduate from the University of Hartford’s performing arts conservatory, the Hartt School, joined the Quintet in 2008. He is now a Boston-based performer, composer, and sought after instructor at the Berklee College of Music.

Session pianist and keyboardist John Jarvis has performed on countless rock and country albums since the mid-70’s, having collaborated with musicians such as Rod Stewart, Vince Gill, Art Garfunkel, Delbert McClinton, and Chet Atkins, among many others.

World-renowned touring double bassist Simon Planting has studied with Europe’s finest and played with the top echelon of jazz manouche guitarists. Now based in San Francisco, he has been a member of the John Jorgenson Quintet since 2009.

Originally from Alabama, Rick Reed spent many years in New York City playing jazz before relocating to Nashville, where he has played with a diverse range of artists from Shelby Lynne to Ray Davies from the Kinks.

The John Jorgenson Quintet is preparing the release of its new (and most ambitious) recording yet, Returning, in 2014. The masterful quintet can be seen performing on stages all over the world.