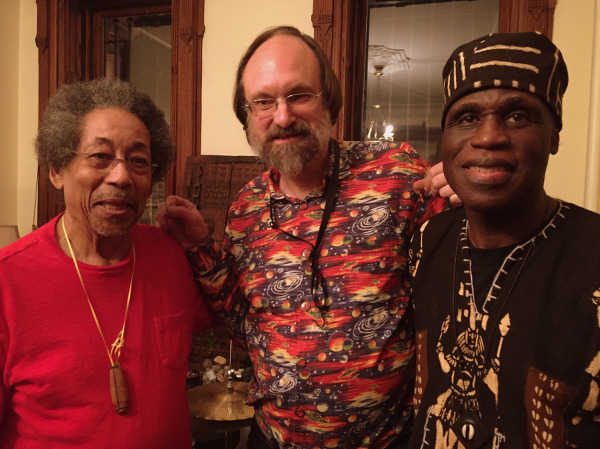 Joseph Daley‘s Tuba Trio is an exploration into the improvisational concepts of the visionary composer & multi-instrumentalist Sam Rivers. Daley dedicates his new album The Tuba Trio Chronicles to the memory of his good friend and mentor Sam Rivers, with whom he played in the Rivbea Tuba Trio along with Barry Altschul. Joseph Daley is heard on tuba and euphonium and joined by Warren Smith, heard on drum set, marimba and a variety of percussion instruments, and Scott Robinson on a variety of reeds including tenor sax, bass sax, contra-alto clarinet and more.After nearly 40 years of recognition as one of the consummate sidemen on the adventurous music scene—with remarkable artists like Sam Rivers, Carla Bley, Gil Evans, Charlie Haden, Taj Mahal and so many more—Joseph Daley stunned musicians and fans alike with his brilliant CD, The Seven Deadly Sins released in 2011. The album also received rave reviews and made several Best of 2011 lists. Featuring his Earth Tones Ensemble (a full Jazz orchestra augmented by six additional low-toned horns, and including a seven-member rhythm section and four special guests), this powerfully innovative music mines the same rich vein of musical expression as that of immortals like Charles Mingus, Duke Ellington and George Russell.

Whether performing with his large ensemble; with his evocative Ebony Brass Quintet; or in the sparer solo, duo or trio contexts; sheer musicality, deeply-hewn emotion and jubilant innovation are always at the core of Joseph’s most singular musical expression. Best known for playing the tuba, Joseph also plays euphonium and valve trombone; but these days his growing reputation as a visionary composer is bringing him worldwide acclaim.

Warren Smith is known for masterful percussion work with an endless array of jazz artists, a bevy of pop stars, and in countless studios and Broadway pit bands, as well as on more than 3,000 recordings. He might be the only man alive who has played with Nat Cole, Harry Partch and Charles Mingus, as well as Janis Joplin, Aretha Franklin and Barbra Streisand! In 1961 he co-founded the Composers Workshop Ensemble, which is ongoing. Over the decades, Warren has worked with Muhal Richard Abrams, Count Basie, Anthony Braxton, Bill Cole, Nat King Cole, Miles Davis, Gil Evans, Aretha Franklin, Julius Hemphill, Quincy Jones, Janis Joplin (as her musical director), Makanda Ken McIntyre, Carmen McRae, Charles Mingus, Van Morrison, Harry Partch, Sam Rivers, Nina Simone, Henry Threadgill, Andrew White, Tony Williams’ Lifetime, Nancy Wilson, and Joe Zawinul. Warren was a founding member of Max Roach’s percussion ensemble, M’Boom. From the ’60s through the ’80s,Smith ran Studio WIS, which hosted many New York jazz musicians, such as Wadada Leo Smith and Oliver Lake. These days, Warren continues to perform with many top artists, as well as leading his own ensembles.

Scott Robinson is an American jazz musician. He is best known for his work with various styles of saxophones, but also performed with the clarinet, flute, and sarrusophone, along with other, more obscure instruments. Robinson has appeared on more than 200 LP and CD releases, including eleven under his leadership, with such musicians as Lionel Hampton, Anthony Braxton, John Scofield, Joe Lovano, Ella Fitgerald, Paquito D’Rivera, Sting, Maria Schneider, Elton John, Buck Clayton, and the New York City Opera, two of these recordings won a Grammy Award. He has also received four fellowships from the National Endowment for the Arts. In 2000, the State Department named Robinson a “Jazz Ambassador” for the year 2001, funding a tour of West Africa in which Robinson played the early works of Louis Armstrong. Material from theses appearance was subsequently released on the album Jazz Ambassador: Scott Robinson Plays the Compositions of Louis Armstrong by Arbor Records.

“This captivating and stirring disc is further testament to Daley’s superb musicianship and his artistic brilliance. The vibrant spontaneity, the shared musical vision and exquisite camaraderie make listening to this multi-textured record an inspirational and invigorating experience, one that can be savored anew with each spin.” – Hrayr Attarian on The Tuba Trio Chronicles, All About Jazz 2016

This concert is made possible through the Music Program of the New York State Council on the Arts (NYSCA), & a Collaborative Opportunities Grant from the Cullen Foundation made to Hallwalls and the Colored Musicians Club for the .9 Miles Collaborative.