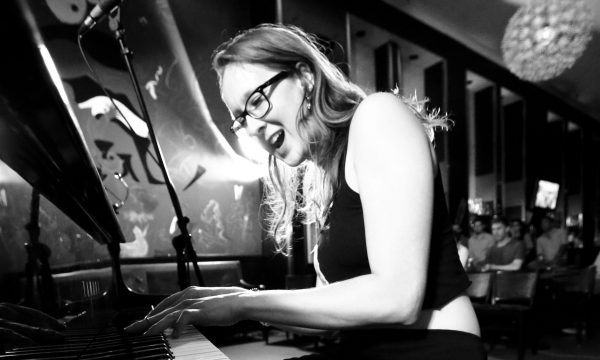 She received her Bachelor’s in Jazz Studies – performance at the University of North Florida where she studied piano and voice. She received the outstanding musician’s award every year at UNF. While in Jacksonville she performed weekly with her trio at many different venues and private events. In May 2011, she won the Generation Next Youth Talent Competition at the Jacksonville Jazz Festival.

In September 2014 she received her Masters in Jazz Piano Performance from William Paterson University where she studied with pianists Harold Mabern, James Weidman, and Mulgrew Miller among many other note-worthy faculty members. She was the pianist in the WP Jazz Orchestra in which performed alongside NEA Jazz Master Jimmy Heath and legendary vibraphonist Steve Nelson. Kelly received the Outstanding Graduate Music Student Award for her class. In June 2014 Kelly was chosen as the pianist in the William Paterson Colombia Band, which toured three cities in Colombia, South America where she taught at two week-long clinics and performed at three large concert halls.

Since moving up north, Blue Note, Dizzy’s Club Coca Cola, Birdland Theater, Apollo Theater, Minton’s, Smalls Jazz Club, Mezzrow, Jazz Standard, The Django, Zinc Bar, Fat Cat, B.B. Kings, The Bitter End, and Rockwood Music Hall among many other restaurants and venues in the city. She has also performed at the Deerhead Inn in PA and in New Jersey at Trumpets Jazz Club, Mexicali Live, Hat City Kitchen, and Duke’s Southern Table among many other restaurants and private events.

She has performed in bands alongside jazz luminaries such as George Coleman, Christian McBride, Dee Dee Bridgewater, Jimmy Heath, Steve Nelson, Nat Reeves, Steve Williams, Bill Goodwin, Rich Perry, Winard Harper, Philip Harper, Steve Wilson, Stacy Dillard, Jonathan Barber, Josh Evans, Bruce Williams, Frank Lacy, TK Blue, James Zollar and Jovan Alexandre among others.
In December 2016 she recorded her debut album “Life Rearranged” featuring wonderful musicians Christian McBride, Steve Nelson, Josh Evans, Kush Abadey, Jovan Alexandre, Matt Dwonszyk, Noam Israeli, Tamir Shmerling, and Mike Troy. Since it’s release in October 2017, “Life Rearranged” has received notable reviews and radio play. It is featured as one of the Top 50 albums of 2017 in the LA Times by Scott Yanow. Yanow describes Green’s piano playing as, “sophisticated and modern while also being connected to the tradition,” and “her vocals are subtle, quietly expressive and full of insight.” For more reviews and information please visit www.kellygreenpiano.com !
The Kelly Green Trio has been together consistently for a year and a half featuring Alex Tremblay on bass and Evan Hyde at the drums. After having been together for a year and a half they have already traveled to Colombia, South America to perform and teach as well as toured Florida and San Francisco.

In August 2018 they performed as part of the New Haven Jazz Festival with the legendary George Coleman. On December 5th, 2018 they released their first album, “Volume One” for which they received rave reviews in JazzTimes, All About Jazz, and NYC Jazz Record among others. They celebrated the release at Mezzrow and Birdland Theater in New York City and look forward to celebrating the album on the east coast in April.

In addition to being an outstanding performer, Kelly is passionate about education. She has been giving lessons and teaching classes and workshops since high school. She has taught at the Jazz House Kids Summer Workshop and the William Paterson Jazz Workshops for the past four years and is currently a Teaching Artist for Jazz House Kids year-round.