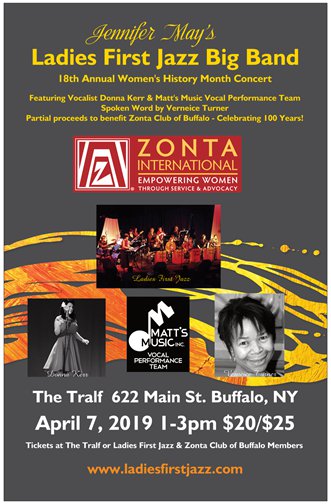 Ladies First Jazz, led by Jennifer May and Jenny Jones, is an all-female, 16 piece jazz group based in the WNY area. The Big Band has been awarded the title of “Buffalo’s Best Big Band” by the Buffalo Music Awards (sponsored by Nightlife Magazine) and were named the winners of the JazzBuffalo Poll Awards 2018 for Best Big Band and Best Large (Combo) Ensemble.

Donna Kerr, Grammy-nominated Music Educator, Performer and Director of The Buffalo Dolls whom have been nominated by Artvoice and Nightlife Magazine for Best Vocal Harmony Group and recently won the JazzBuffalo Award for Best Jazz Pop Group 2018. In collaboration with the Ladies First Jazz Big Band, they also won for Best Jazz Performance of the Year 2018 for their sold-out Jazzy Christmas Show featured at the Hotel Henry.

Matt’s Music, Inc. Vocal Performance Team, led by Zach Carr, 2018 Winner of the JazzBuffalo Best Male Vocal award will showcase students from the school. Founded in 2015, The Matt’s Music Vocal Performance Team is comprised of the top vocal performers from Matt’s Music, Inc., and from all across Western New York. MMVPT is dedicated to furthering and developing the performing and vocal prowess of each member as students participate in a variety of performance events, competitions, festivals, and much more. They have performed at venues all across the United States with performances at legendary venues like Carnegie Hall in New York City. Many of the performers from this team are nationally ranked and each team member takes great joy in sharing their love of music and performing with all of Western New York.

2018 Artie Award Winner for Best Actress for her performance in Skeleton Crew, Verneice Turner, will be featured in a Spoken Word performance Ms. Turner has performed with the African American Cultural Center Dancers of Buffalo, NY from the “60s-’70’s, at various theatres throughout WNY & NYC, starting out at the Paul Robeson Theatre. She is involved in poetry performances in Buffalo, Philly, DC. and as a singer, has performed in Toronto.

Partial proceeds from the show are to help Zonta Club of Buffalo. Celebrating 100 years, Zonta International is a leading global organization of professionals empowering women worldwide through service and advocacy. Find more information at: https://zontaclubbuffalo.org