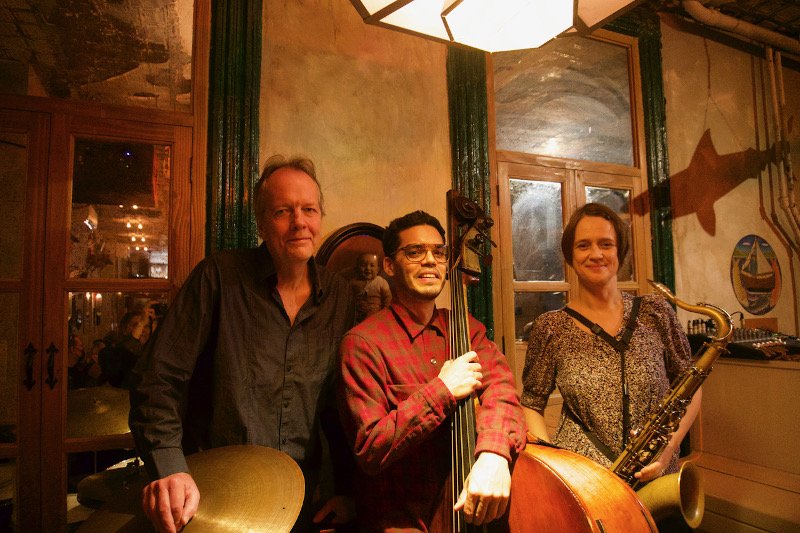 Dreamlike experiences. Sparks fly and a musical interaction works without arrangement or plan. An organic musical process develops out of intuition alone. The same magic happens every time. When Brandon Lopez, a New Yorker with Puerto Rican roots, joined the duo of saxophonist Ingrid Laubrock and drummer Tom Rainey, this wasn’t simply about adding a plus one to the Laubrock – Rainey duo. Thanks to the young bassist (born 1988), already collaborating with musicians from Dave Liebman via Zeena Parkins to John Zorn, a new dynamic has formed involving all three. In this triangular constellation a different balance is achieved and an altered play of energies. They are clearly on the same wavelength, with a similar sense and understanding of overarching form, inner structure, timing, feeling, energy, density, transparency and volume.

“Right from the first note the chemistry between them was right. The interplay between the three worked so effortlessly and naturally it bordered on telepathy. The three want to keep up the momentum and capture the magic moment,” writes Christoph Wagner in the liner notes.

“These days we’re awash in freely improvised recordings, most of which pale compared to the experience of witnessing such a performance in the flesh. Saxophonist Ingrid Laubrock and drummer Tom Rainey have spent years working together (and living together, as a married couple), and they long ago achieved a connection that makes their spontaneous music feel extraordinary — not exactly composed, but with such intuition that it doesn’t feel instantaneous. They first played with bassist Brandon Lopez in 2017 and the rapport was strong enough that they’ve continued working together. This debut album proves their instincts right. Lopez is a phenomenally talented bassist who shows off his ferocity a bit too often, but here he sounds incredible, applying his muscular attack to go well beyond what we might expect from a bassist. He has a simpatico partner in Rainey, an innately swinging drummer who can maintain pulse while making sounds that rumble, scrape, punch, and thwack. Together they give Laubrock’s rangy improvisational gifts a multi-directional, 3-D foundation. The bassist has absorbed plenty of lessons from William Parker, but apart from a shared sense of propulsion, Lopez has fully escaped that shadow here. It’s a knockout from start to finish.” – Peter Margasak