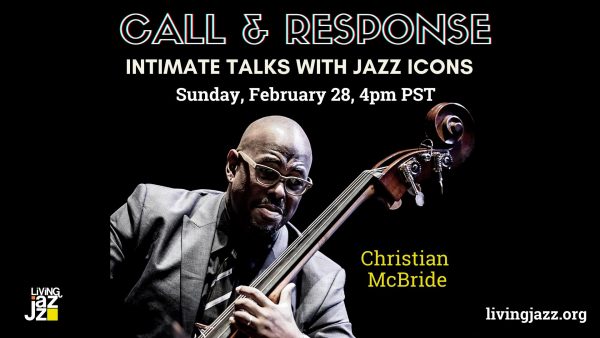 LIVING JAZZ PRESENTS
CALL & RESPONSE
Intimate Talks with Jazz Icons
SUNDAY, FEBURARY 28
Featured Guest Christian McBride
Moderated by Andre Kimo Stone Guess
HONORING BLACK HISTORY MONTH
Living Jazz invites you to join us for a unique series of intimate conversations featuring some of the world’s most iconic jazz musicians. Join us as these legends speak candidly about the inspiration behind their music, their struggles and victories, what it means to be an artist during these challenging times, and what the future holds for the music industry. We’ll invite your questions and active participation during the open Q&A. A personal virtual experience with jazz legends and industry experts you’ll wont want to miss.
Run of Show
Opening remarks and introductions
Conversation between featured guest & moderator
Q&A with audience participation
Closing remarks
Christian McBride
GRAMMY Award-winning bassist, composer, arranger, respected educator and advocate, Christian McBride has performed and recorded with a number of jazz musicians and ensembles, including Freddie Hubbard, McCoy Tyner, Herbie Hancock, Pat Metheny, Joe Henderson, Diana Krall, Roy Haynes, Chick Corea, Wynton Marsalis, Eddie Palmieri, Joshua Redman, and Ray Brown’s “SuperBass” with John Clayton, as well as with many pop, hip-hop, soul and classical musicians.
Currently he hosts and produces “The Lowdown: Conversations With Christian” on SiriusXM satellite radio and National Public Radio’s “Jazz Night in America,” a weekly radio show and multimedia collaboration between WBGO, NPR and Jazz at Lincoln Center, showcasing outstanding live jazz from across the country. With his staggering body of work, McBride is the ideal host, drawing on history, experience, and a gift for storytelling to bridge the gap between artist, music, and audience. He brings that same breadth of experience to bear as Artistic Advisor for Jazz Programming at the New Jersey Performing Arts Center (NJPAC).
Whether behind the bass or away from it, Christian McBride is always of the music. From jazz (Freddie Hubbard, Sonny Rollins, J.J. Johnson, Ray Brown, Milt Jackson, McCoy Tyner, Roy Haynes, Chick Corea, Herbie Hancock, Pat Metheny, to R&B (Isaac Hayes, Chaka Khan, Natalie Cole, Lalah Hathaway, and the one and only Godfather of Soul himself, James Brown) to pop/rock (Sting, Paul McCartney, Carly Simon, Don Henley, Bruce Hornsby) to hip-hop/neo-soul (The Roots, D’Angelo, Queen Latifah) to classical (Kathleen Battle, Edgar Meyer, Shanghai Quartet, Sonus Quartet), he is a luminary with one hand ever reaching for new heights, and the other extended in fellowship—and perhaps the hint of a challenge—inviting us to join him. christianmcbride.com
Andre Kimo Stone Guess
Andre Kimo Stone Guess is an internationally respected leader who has over 25 years of executive experience. He is the founder and president of GuessWorks, Inc., a management consulting firm. He previously served as CEO of the August Wilson Center for African American Culture in Pittsburgh and was VP and Producer for Jazz at Lincoln Center in New York.
GuessWorks, music management clients have included: Christian McBride, Darin Atwater, Sean Jones, Aaron Diehl, Warren Wolf and Nicholas Payton.
Andre received a B.S. in Economics with a minor in Actuarial Mathematics from the University of Louisville. He has finished coursework and completed the comprehensive examinations for a PhD in Urban and Public Affairs with a concentration in Policy Analysis and Evaluation, also at the University of Louisville.
Andre has served as producer for several recording projects, including one that won a Grammy. He is also a writer and cultural critic with works published by USA Today, The Courier-Journal, The Root, The Grio and ESPN’s The Undefeated and two platforms that he founded and co-founded educated-guesses.com and cultureofchrist.org.
+ Google Calendar+ Add to iCalendar