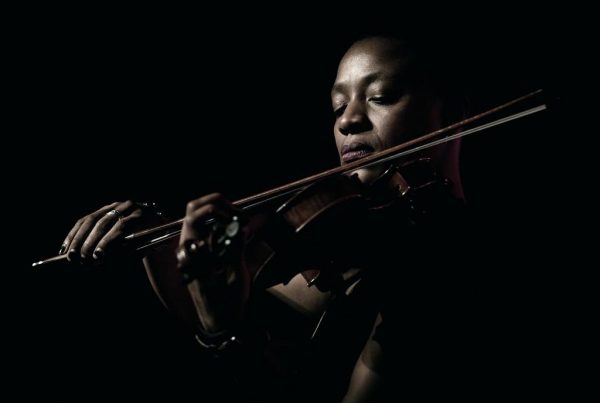 HEAR in NOW– the “avant-classical, jazz-tinged” international string trio comprised of Mazz Swift, cellist Tomeka Reid and double bassist Silvia Bolognesi, was originally scheduled to perform live in Asbury Hall on May 21st, but due to the current pandemic, the concert has been postponed to a date yet to be determined. In the meantime, Mazz Swift will share a special solo concert performance that will be prerecorded on video from her home. Please join us on Thursday, May 21st at 8:00 pm EST to enjoy this unique offering and share in the spirit of hope & solidarity. We thank you for your support and look forward to seeing you all in person at a concert sometime in the near future!

Critically acclaimed as one of America’s most talented and versatile performers today, Violin/Vox/Freestyle Composition artist Mazz Swift has engaged audiences all over the world with the signature weaving of song, melody and improvisation that she calls MazzMuse. Mazz combines elements of classical, folk, rock, jazz, free improvisational music and electronica to create a rich, unique and diverse musical experience. She is a singer, composer and Juilliard-trained violinist who plays electric and acoustic instruments and has, over the years, performed and recorded with a diverse accumulation of artists including Whitney Houston, Perry Farrell, Dee Snider, James “Blood” Ulmer, Vernon Reid, Valerie June, DJ Logic, William Parker, Butch Morris, Jason Lindner, Kanye West, and most recently as string mistress for D’Angelo’s “Vanguard Strings”. On electric violin, acoustic violin, soulful singing and improvisation, Mazz brings music that speaks directly to your soul. Expect to be transported.

Aside from full-time work as a performer, Swift is a composer and educator. Her works include commissions by The Banff Centre for Arts and Creativity, The University of Delaware, Neues Kabarett, The Canales Project, The New Harmony Music School & Festival, and the Blaffer Foundation. Several of her pieces for atypical chamber ensemble have been performed live and also replayed on National Public Radio. Mazz has performed and taught workshops on free improvisation on six continents, most notably having traveled to Suriname, Mozambique, Côte d’Ivoire, Ghana, Cameroon, Senegal, Albania and Siberia as cultural ambassador at the invitation of the United States Department of State. She is also a teaching artist with Carnegie Hall’s “Future Music” and “Lullaby” programs, where she coaches an ensemble of talented teens from every corner of NYC, writes lullabies with incarcerated mothers and mothers-to-be, and leads professional development sessions for professional symphony orchestra members and their students. Mazz sits on the artistic board for the Jersey City-based chamber music collective Con Vivo and is also a proud performing member of that organization. Two of her compositions are featured on Con Vivo’s full length CD, Modern Dances, one of which is a piece dedicated to the memory of Trayvon Martin and his family titled “Invisible”. She released her first CD as bandleader (MazzMuse: The Band) in 2014 and is currently working on a solo album: Solo MazzMuse.
more info at: https://mazzmusic.com