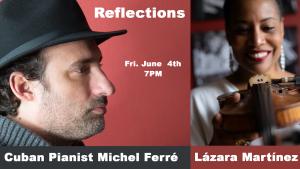 Michel Ferré – piano
Guest violinist – Lázara Martínez of Havana Loops
With a friendship now spanning over 40 years, from the beginning of their studies at the Havana music Conservatory Manuel Saumell, Michel Ferré & Lázara Martínez will collaborate in a concert not to be missed on June 4th at PAUSA art house.
Michel Ferré’s classical and jazz training as a pianist in Havana greatly influenced his musical formation and who he is today. Michel has collaborated with American singer, songwriter, producer and actress Lauryn Hill and Spanish singer Concha Buika. “El Coco”is his latest CD production of originals and Cuban classics in collaboration Lázara Martínez , Armando Arce “Pututi” Jeff Hofmann, Edward Magdariaga, Hansel Herrera, Vladimir Espinosa among many others. Michel currently lives in Miami with his wife and two children.
PAUSA’s owner, Cuban born Lázara Martinez began her violin studies in Havana Cuba at the age of 8. After receiving her Honor Diploma from the Amadeo Roldan Conservatory, she emigrated to the Dominican Republic where she was a member of the National Symphony in Santo Domingo. She was also a member of the National Symphonic Orchestra of Cuba in Havana and a soloist & principal violinist with the Camerata Romeu. She migrated to the States in 1998 and received a Bachelor’s degree in Media Production from SUNY at Buffalo – Summa Cum Laude – Phi Betta Kappa and a Masters Degree in Documentary production from the City College of New York. Lázara has been a member of the Slee Sinfonietta, a substitute violinist with the BPO, the co-founder of the String Quartet Boléo and member of the Afro-Cuban Jazz group “El Coco” with whom she recorded the self titled CD ” El Coco”, released in 2017.
+ Google Calendar+ Add to iCalendar