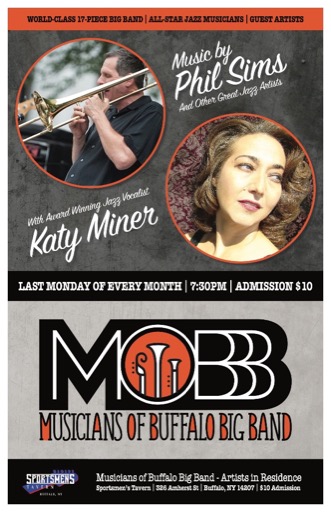 Phil Sims, the founder of the Buffalo Brass Big Band, formed the Musicians of Buffalo Big Band (the MOBBB). This 17-piece band consists of many of the area’s top jazz artists and big band players.  Performing on the last Monday of the month.  Then closing out the year Big Band Christmas Holiday Concert.

Vocalist Katy Miner will be the featured vocalist for each MOBBB performance.

About Bruce Johnstone…
Bruce’s reputation as a jazz musician began in his native New Zealand, ultimately sending him to Australia where he quickly became prominent. From there, Bruce moved to England and once again established himself on the UK jazz scene, and on into Europe.

While in Copenhagen, Bruce performed with greats Dexter Gordon, Ben Webster, and Nils Henning Orsted Peterson. Ultimately, Bruce was hired on reputation alone to tour with the world-renowned Maynard Ferguson Big Band, as well as the Woody Herman Big band, which brought his talents to the US market.

Bruce came to Western New York and became the director of curricular jazz at Fredonia State University. He is recently retired from that position but is still an in-demand jazz musician and clinician, world-wide.