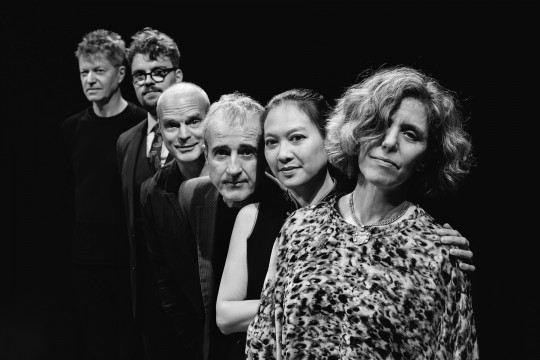 Commissioned by the 2015 Greenfield Prize in Music, RHAPSODY is an acoustic, evening-length song cycle on the subject of travel and migration. This star-studded band features John Medeski on piano, Nels Cline on acoustic guitars, Zeena Parkins on harp, Jen Shyu on vocals and erhu, Fabian Rucker -on saxophone, and Bobby Previte on trap drums, autoharp, and harmonica.

In 2015, Previte received the Greenfield Prize in music at the Hermitage Artist Retreat to create a new work. Terminals Part II: In Transit (or RHAPSODY) is the result. RHAPSODY is the second in a three-part series exploring the experience of travel. Terminals Part I: DEPARTURES, is a set of five concertos written for the visionary percussion group SO Percussion and five improvisers. This piece premiered at Merkin Hall in New York City in 2011 and the recording was released on Cantaloupe Music in 2014. In RHAPSODY, the improvisers from DEPARTURES, each of whom had been selected based on their ability to separately carry fifteen-minute concertos, were thrown together into one ensemble.

Beginning from the point of view of a passenger sitting comfortably in an airplane, RHAPSODY twists and turns, until the traveler finally arrives on an unfamiliar shore. What is the experience of being in transit? Separated from your home but not yet at your destination, you are neither here nor there, confined with strangers in an intimate environment for a predetermined amount of time. Uncomfortable, yet somehow free. To travel is to be bound with these strangers by faith—faith in the vessel which carries you, faith in the people who operate it, and ultimately, faith in the strangers waiting at your destination.