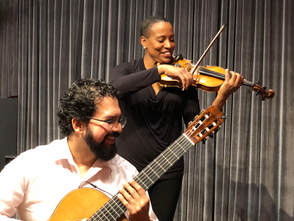 Mexican guitarist Ricardo Saeb has performed in venues across Latin America, Europe, the Middle East, and the United States. His performances have been described as “perfectly balanced,” “of an exquisite subtlety,” and “simply spectacular.” Dr. Saeb began his music education at the Conservatory of Chihuahua, and continued at the Conservatorio de las Rosas and the University of Texas at Austin. In 2016, he received his Doctorate degree in Musical Arts from the University of Kentucky, under the mentorship of professor Dieter Hennings. His tours have taken him to cities as diverse as Querétaro, Beirut, Ciudad Juárez, Austin, Boston, Dallas, and Córdoba. Ricardo Saeb has appeared as a guest artist at international festivals such as the Festival Internacional de Música de Morelia, Festival Internacional Chihuahua, Queretaro’s International Guitar Festival, Chicago’s Latin American Guitar Festival, among others. Ricardo recently moved to Buffalo, NY, where he teaches privately.
Some of the pieces included in this program are:

Cuban born Lázara Martinez began her violin studies in Havana Cuba at the age of 8. After receiving her Honor Diploma from the Amadeo Roldan Conservatory, she emigrated to the Dominican Republic where she was a member of the National Symphony in Santo Domingo. Back in Cuba Lázara performed with the National Symphonic Orchestra of Cuba in Havana and as the concert-mistress with the all-female chamber group Camerata Romeu. With the Camerata, she appeared at numerous international festivals including the Cervantino in Mexico, International Water Festival in Sweden, International Festival of the Arts, Costa Rica, International Festival of Religious Music, Colombia and the International Festival of Contemporary Music in Havana, as well as tours around Spain, Canada, and Ecuador. While living in Mexico, she was a member of the Carlos Chavez Symphonic Orchestra, Orchestra of the State of Hidalgo, Camerata de las Americas, and the Mineria Summer Festival Orchestra. Since moving to Buffalo Lázara performed on numerous occasions with the Slee Sinfonietta, as a substitute violinist with the BPO as well as other local jazz, Latin and chamber music groups in the area.