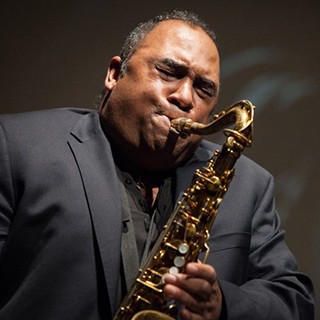 Co-presented by the Pappy Martin Legacy Jazz Collective and Burchfield Penney, part of a three-day John Coltrane festival in celebration of the jazz icon’s 92nd birthday

Nationally recognized saxophonist, Rob Dixon has worked with a wide variety of artists, from Illinois Jacquet to Ali from “a tribe called quest”. In addition to working full-time as a musician, Dixon works for the Owlstudios record label and is one of the principle organizers for Indy Jazz Fest, an annual musical event in Indianapolis.

A graduate of Hampton University, Dixon continued studies at Indiana University in the masters of music program under the direction of David Baker. In the subsequent years following, Dixon established himself as a professional musician, working with the Count Basie band, Rufus Reid, composer Bill Lee (Spike Lee’s father), Illinois Jacquet, Jonah Jones, Mike Clark’s “Indigo Blue” as well as many others. Dixon returned to Indianapolis in 2002 and started Triology (the first group signed by the Owlstudios record label). Recently one of his original compositions (“Soul Talk”, performed by Derrick Gardner and the Jazz Prophets) has been featured in the major motion picture “Big Stan” (a Rob Schneider directorial debut). Currently, Dixon is working with his ensemble Triology, trumpeter Derrick Gardner, drummer Mike Clark, and pianist Steve Allee on a regular basis.

George Caldwell is a fully tenured jazz piano legend who has served with the Count Basie Orchestra, the Duke Ellington Orchestra, as a sideman extraordinaire, and as leader of his own ensembles. Renowned as performer, composer, bandleader and teacher, Caldwell presided over the ivory 88s for the Basie Orchestra when the group won a “Best Large Jazz Ensemble Performance” Grammy in 1996. He’s one of the pre-eminent swing players in modern jazz and instrumental in co-organizing the annual John Coltrane celebration at the Burchfield Penney.

Ahmad Pleasant – As a community-builder, the late Pappy Martin founded the Love Supreme School of Music that focused on instrumental lessons, theory and the science of music. Saxophonist Ahmad Pleasant started lessons at the school at age four. Now a high school junior, Ahmad is one of Western New York’s finest emerging jazz talents, 1st place winner in the 2018 Buffalo’s Got Talent competition.

Amari McDade  – Amari is a 10th grader and vocal major at the Buffalo Academy for Visual and Performing Arts and a member of its Vocal Symphony Residency.  His goal is to further his studies in music and/or musical theater at NYU.

Call 716-878-6011 during gallery hours for tickets or visit the Burchfield Penney.