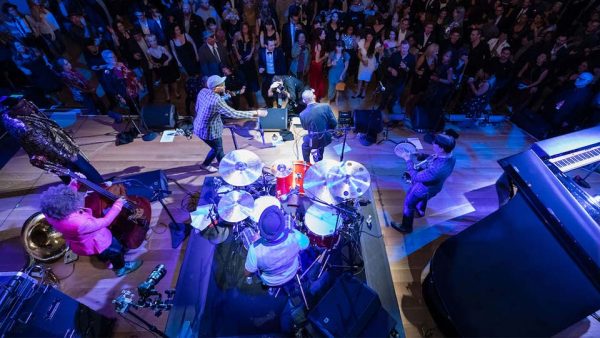 The coronavirus separates us, threatening the fabric of the community – but music connects, which is why we’ve launched Fridays at Five. It’s what we need right now: a new series of weekly pre-recorded concerts that aspire to connect you – to music, to musicians, to the warm and unique feeling of experiencing live music at the SFJAZZ Center.

For just $5 a month, you can sign up for our new digital membership and tune in each Friday at 5 PM (PDT) / 8 PM (EDT) for the latest concert. Make it a regular date. Bring a glass of wine and cozy up – we think you will discover that digital technology can reveal new dimensions of musical performance. Fridays at Five is not your typical video concert series; it is designed to take you inside the music.

For nearly four decades – and especially since the opening of the SFJAZZ Center in 2013 – this organization has worked to honor the ever-changing jazz tradition and to build a community around this unparalleled American art form. And the coronavirus, ironically, has served as a call to action: our hall may be dark right now, but the music is alive, and we intend it to remain so. Fridays at Five is our starting point, responding to the virus in a very “jazz” way – building on decades of hard work at SFJAZZ, while improvising our way to a digital future. The music will outlive the virus.

See below for full descriptions.

This once-in-a-lifetime performance from December 2014 was culled from one the most memorable weeks in SFJAZZ’s history, in which we celebrated the 50th Anniversary of jazz legend John Coltrane’s magnum opus A Love Supreme.

Recorded on December 9, 1964, Coltrane’s devotional masterpiece is among the most influential and enduring recordings in jazz history, and has earned its place as one of the definitive artistic statements of the 20th century.

On The Corner: Five Things To Know About Ravi Coltrane

On The Corner: Celebrating A Love Supreme

Treasured Bay Area singer Bobi Céspedes is a sonera of the classic Cuban style and for this performance, filmed in June 2019, she presented the world premiere of a selection of brand new songs joined by guest percussionist John Santos. Céspedes founded the influential Bay Area Cuban ensemble Conjunto Céspedes in 1981 with her brother Luis and nephew Guillermo, sharing the stage with salsa titans Tito Puenté, Rubén Blades and Celia Cruz. The singer worked with Grateful Dead drummer Mickey Hart’s Planet Drum project beginning in 1998, recording two albums and touring the world with his ensemble that also featuring SFJAZZ Education Director Rebeca Mauleón. Her long-awaited debut album, Rezos, was released in 2003, and this performance celebrates her new material and her quarter-century collaboration with Santos.

Filmed on October 10, 2018 on what would have been Monk’s 101st birthday, this special event featured two generations of piano artistry honoring Monk’s legacy and trove of immortal compositions. 2018 NEA Jazz Master Joanne Brackeen was the first female member of Art Blakey’s Jazz Messengers and is among the most virtuosic pianists and composers to emerge in the post-bop era. Thelonious Monk Institute of Jazz Performance graduate and Mary Lou Williams Jazz Piano Competition winner Helen Sung has recorded eight albums and worked with T.S. Monk’s “Monk on Monk” Tentet. Kris Davis was named 2017 Rising Star Pianist in DownBeat and her 2016 album Duopoly made best-of-year lists in The New York Times, the Los AngelesTimes, and JazzTimes. She has performed at SFJAZZ in duo with Vijay Iyer in tribute to the late Geri Allen and with her trio Diatom Ribbons featuring drummer Terri Lyne Carrington and percussionist Val Jeanty.

“The best jazz singer alive today” (NY Times), San Francisco native Mary Stallings has appeared alongside jazz greats including Cal Tjader, Dizzy Gillespie and the Count Basie Orchestra over her stellar career. Leader of a dozen albums since her 1962 debut with vibraphonist Cal Tjader, Stallings has had a long history with SFJAZZ, receiving a Lifetime Achievement Award at our 2011 Gala and performing the opening song during the historic Opening Night concert at the SFJAZZ Center.

For this performance, filmed in March 2018 during her week as an SFJAZZ Resident Artistic Director, she’s is joined by the masterful pianist Bill Charlap—one of the most respected keyboardists in jazz and leader of one its great piano trios, a telepathic coterie including bassist Peter Washington and drummer Kenny Washington.

This rollicking performance by the three-time GRAMMY-winning blues icon comes from his run of March 2020 shows that were some of the very last held at the SFJAZZ Center before we closed our doors due to the coronavirus pandemic. A longtime Berkeley resident, Mahal has created a singular body of work that embraces the raw energy of field hollers, the rent-party gumption of early jazz, the urbane grooves of rhythm and blues, the church-derived cadences of soul music and the rhythms of West Africa, via New Orleans and the Caribbean. Since his first release 50 years ago with the Rising Sons, which he founded with Ry Cooder, Taj has been a cultural force, bringing blues culture to new generations. He brought his telepathic quartet for this special night.

Mexican-American singer and songwriter Lila Downs is a GRAMMY winner and one of the most celebrated artists of her generation. A native of Oaxaca, she’s built a career bridging cultures and languages, both as a musician and social activist for humanitarian causes. With guidance from her vocalist mother and inspiration from Mexican singing greats Chavela Vargas and Lucha Villa balanced by the gamut of American music she heard in the States, Downs made her major label debut with 1999’s jazz-informed La Sandunga, and her contributions to the 2002 Frida Kahlo biopic Frida elevated her status to that of a major international star. She’s won a GRAMMY and multiple Latin GRAMMYs, including a nod for her newest Sony Music album, Salón, Lágrimas y Deseo (Salon, Tears and Desire). This performance, filmed in May 2019, is a celebration of that release.