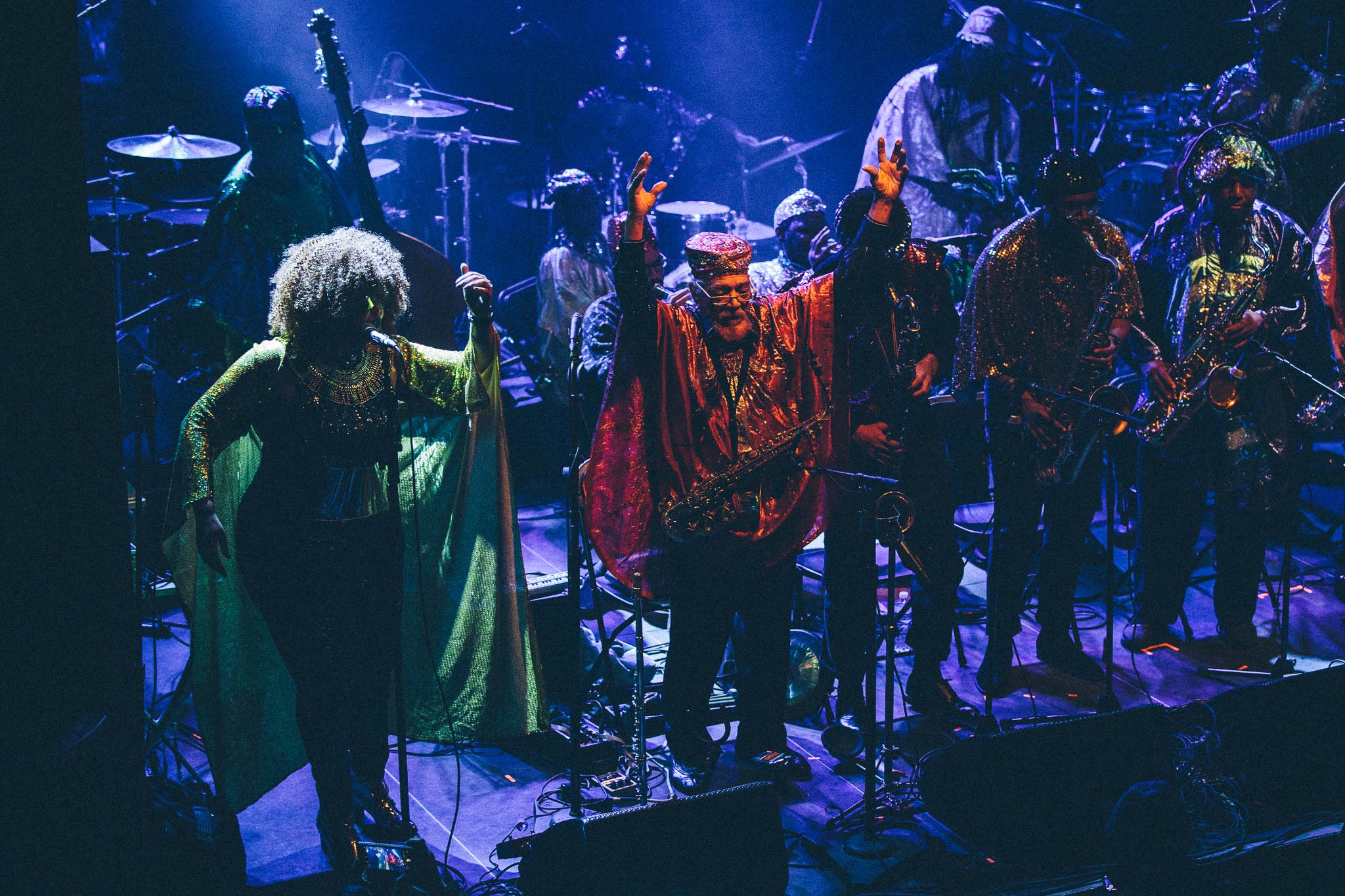 The .9 Mile Collaborative (a partnership between the Historic Colored Musicans Club and Hallwalls’ music program) is proud to present the Sun Ra Arkestra on Thursday, September 2nd 2021 at 8:00 p.m. in Buffalo’s magnificent Asbury Hall at Babeville. Though the iconic Sun Ra left the planet in 1993, his cosmic legacy is proudly maintained by the interstellar sounds of the Sun Ra Arkestra, which now operates under the direction of Marshall Allen. Longtime alto saxophonist Marshall Allen has been a constant presence in the music of Sun Ra since 1958, and is himself celebrating 97 years on planet earth in 2021. Don’t miss this rare and unique opportunity to travel the spaceways with this profound and influential cultural phenomena, created by one of our solar system’s great prophets of thought and music!

The Sun Ra Arkestra has been hailed as one of the greatest big bands of all time. With a massive, joyous songbook and the kind of well-organized chaos that sees their legendary two-hour sets move deftly between rolling grooves, sing-along chants, and atonal blasts of mischievous brass, the Arkestra remains one of the most unmissable live acts today. In 2018, the 83rd Downbeat Readers Poll saw the Arkestra ranked eighth in the “Big Band” category. In 2019, the Arkestra has backed Solange and U2, inspired Lady Gaga to include “Rocket Number Nine” as part of her stage show, and welcomed artists like Kamasi Washington and Shabaka Hutchings to join in the fun, opening up the ears of new music audiences globally to a challenging and uniquely defined sound.

As a young musician, Marshall Belford Allen (b. May 25, 1924) performed with pianist Art Simmons, Don Byas, and James Moody before enrolling in the Paris Conservatory of Music. After relocating to Chicago, Allen became a pupil of Sun Ra, subsequently joining the Arkestra in 1958 and leading Sun Ra’s formidable reed section for the next 40 years. Marshall, along with John Gilmore, June Tyson, and James Jacson, lived, rehearsed, toured, and recorded with Sun Ra almost exclusively for much of Sun Ra’s musical career. His membership in the Arkestra makes Allen a pioneer of the Free Jazz movement of the early 1960s, having remarkable influence on the leading voices in the avant-garde. He is featured on over 200 Sun Ra recordings, in addition to collaborations with Phish, Sonic Youth, Digable Planets, and Medeski, Martin & Wood. Allen assumed the position of maestro in 1995, following the ascension of Sun Ra in 1993 and John Gilmore in 1995. Marshall continues to be committed to the study, research, and development of Sun Ra’s musical precepts and has launched the Sun Ra Arkestra into a dimension beyond that of mere “ghost” band by writing fresh arrangements of Sun Ra’s music, as well as composing new music and arrangements for the Arkestra. He works unceasingly to keep the big-band tradition alive.

In the half-between world,
Dwell they: The Tone Scientists
In notes and tone
They speak of many things…
The tone scientists:
Architects of planes of discipline
Mathematically precise are they:
The tone-scientists
~ Sun Ra

WE TRAVEL THE SPACEWAYS
AFROFUTURISM IN MUSIC

“Although the aesthetic and philosophy of Afrofuturism has manifested itself in all aspects of creative endeavor, from the literature of Octavia Butler and the art of Jean-Michel Basquiat to the photography of Renée Cox, the concept first found a musical expression during the early 1950s by Sun Ra (born Herman Blount), who claimed to have been an alien from Saturn and whose marriage of Afrocentric ideology with space age references began a forward-looking musical revolution that informed the approaches of artists from Herbie Hancock to Beyoncé. From the start, the pianist and composer’s self-produced releases on his own El Saturn imprint featured his mixture of lush big band swing combined with African and Asian exoticism, sporting cover art depicting astral voyages and songs with titles like “Plutonian Nights,” “Somewhere in Space,” “Interplanetary Low Ways,” “Rocket Number Nine Take Off for the Planet Venus,” “Space Jazz Reverie,” “Tapestry From an Asteroid, and “Space is the Place.” Beyond the conceptual innovations, Ra was among the first to incorporate electric bass and keyboards in jazz and pioneered group freeform improvisations as well as the use of exotic modes and scales. Live performances were spectacularly theatrical, with the band clad in elaborate futuristic costumes, often accompanied by dancers, fire-eaters, and dramatic lighting. Over his four decade career Ra became one of the most prolific recording artists in history, recording well over 100 full-length albums and dozens of singles, many of which were pressed in quantities of less than 100, making them some of the most collectible jazz records in existence. His ownership of his recorded output stands as an early and influential model of how an artist could control the means of production and distribution of his own work.”
~ Rusty Aceves, July 8, 2019
More info at: www.sunraarkestra.com

Concert Safety Protocols as of 8/11/21: As we have been doing consistently since live programming resumed in mid July, Hallwalls staff will check proof of vaccination at the door, with masks optional for vaccinated individuals and mandatory for those unable to show proof of vaccination. (Nearly 100% of our patrons at our three events in July—7/16 Members Show opening reception, 7/24 concert in Asbury Hall, and 7/28 Drawing Rally in Asbury Hall—have been vaccinated and shown proof.) Asbury Hall is large, spacious, and well-ventilated (indeed air conditioned).