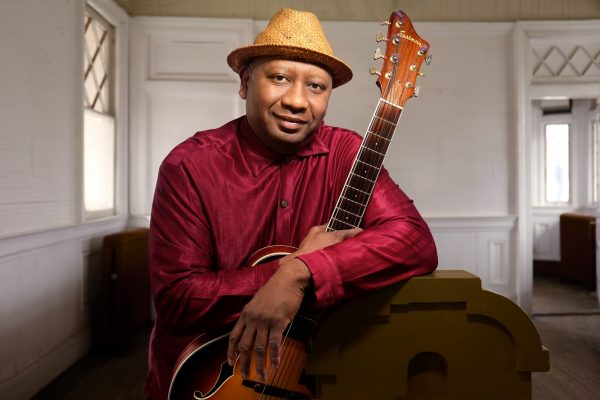 Versatile and sophisticated jazz guitarist Ron Jackson is arguably the best guitar player in NYC. He has performed, recorded and taught music in over 30 countries. With a varied career as a performer, composer and arranger, Highlights include shows and tours with artists such as Taj Majal, Jimmy McGriff, Larry Coryell, Benny Golson, Oliver Lake, Russell Malone and Mulgrew Miller. Ron has been featured as a leader in jazz festivals all over the world, including the North Sea Jazz Festival, Edinburgh Jazz Festivals and Winter Jazzfest, NYC.
Born in the Philippines, lived in many states as a kid, then settled in Harvard, Massachusetts, west of Boston, Ron was initially influenced by rock guitar greats like Jimmy Page, before falling under the spell of jazz and following the style and career of jazz guitar luminaries like Pat Metheny and George Benson. After attending Berklee School of Music on scholarship, studying jazz composition and arranging, Ron spent two formative years in the mid-1980’s living and playing guitar with the lively expat jazz community in Paris, France. Ron moved to New York City where he remains an active participant in Gotham’s always vibrant jazz scene. A master of the six, seven and twelve string guitars, Ron appeared on over 60 albums by such artists as Hal Singer, Graeme Norris, Ron Blake, Gisele Jackson and T.K. Blue, before founding the independent record label Roni Music in 2003 which has since released some of his eight of his albums as a leader including The Dream I Had (2003), Flubby Dubby (2008) and Akustik InventYours (2014). His latest project, Jazz Standards and Other Songs (2019) is an alluring mix of familiar jazz numbers and innovative adaptations of songs from other genre’s like his trendsetting arrangement for jazz trio of Drake’s “Passion Fruit.”
Ron was grateful to be selected as the winner of the 1996 Heritage International Jazz Guitar Competition. He has also been a recipient of the 2012 Donald Knutson Memorial Development Fund and the 1991 and 2000 Meet the Composer Performance Fund.
An acclaimed music educator, Ron currently teaches guitar at Jazz at Lincoln Center, The New School, Midori and Friends, and is the founder and director of the website www.practicejazzguitar.com. Ron has held master classes, concerts and workshops at Jazz at Lincoln Center-Jazz in the Schools, The Thelonious Monk Institute of Jazz, Escuela Creativa Musica in Madrid, Spain and California State University.
Ron has made appearances in several major motion pictures including The Greatest Showman, Vulgar, and Fly by Night. He has also performed in pit orchestras on many Broadway and off-Broadway shows including Avenue Q, Fosse, Shuffle Along, and Bring In `Da Noise, Bring In `Da Funk.
In recent years, Ron has also developed a side career as a freelance writer for Acoustic Guitar magazine where he’s published educational and guitar instructional articles.
By Robert Baird