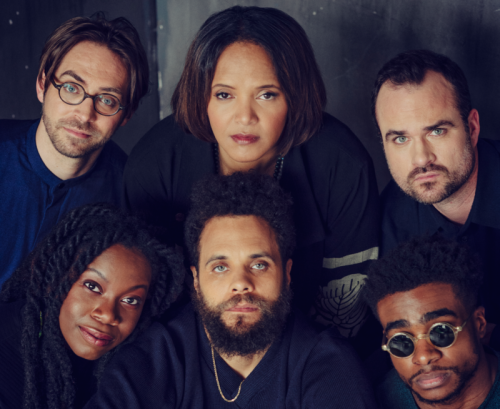 The Vermont Jazz Center is excited to present an online event on Saturday, May 23rd, and Sunday, May 24th  with drummer Terri Lyne Carrington and Social Science. The activities will be livestreamed from the VJC’s website at www.vtjazz.org beginning at 8:00 pm on Saturday and continuing Sunday, May 24th, from 2:00 – 5:00 PM. Saturday will feature a musical presentation and Sunday will be three separate masterclasses including Q&As with audience members. 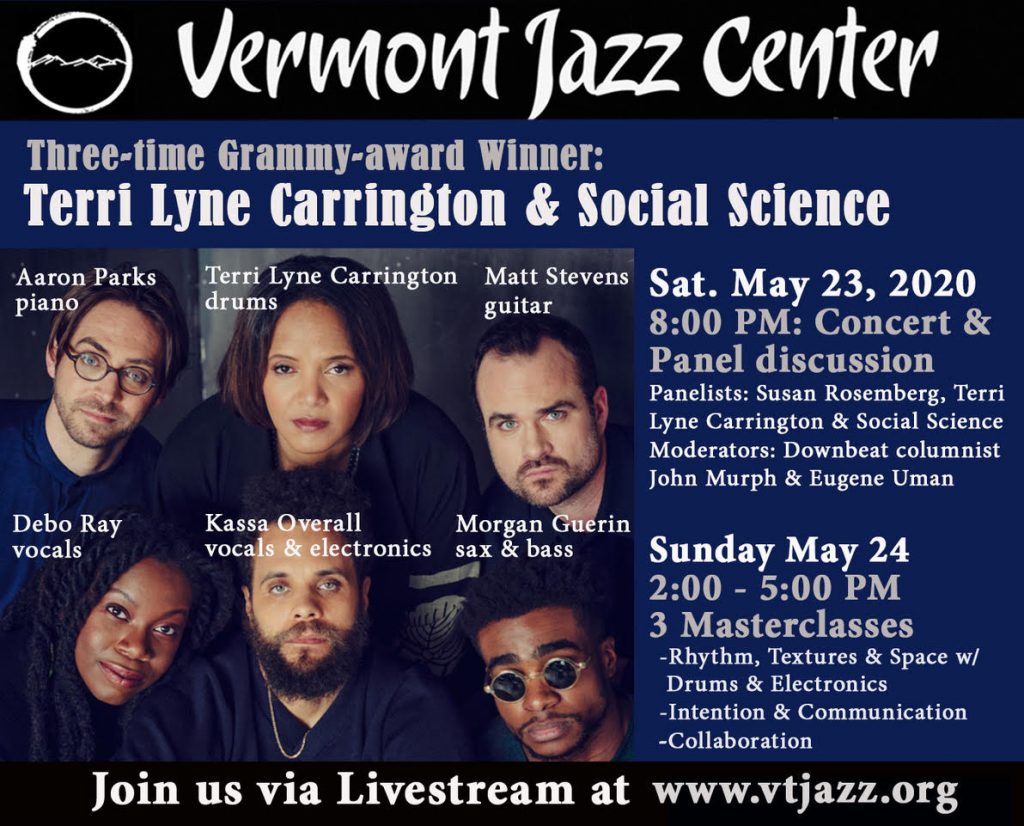 Terri Lyne Carrington and Social Science’s scheduled performance at the Jazz Center meets the challenges of our times by embracing technology; they will be expanding the event to include enhanced educational and communicative opportunities. The event kicks off at 8:00 PM on Saturday, May 23 rd.

The first hour will be a debut presentation of three videos of tunes from their recent recording. These videos will be recorded beforehand in the individual studios of each of the six musicians; their videographer will then craft the six layers, combining and editing each of the musical performances, into a unified whole. They will do this for each of the three tunes. After streaming these three videos, the group will come together in a Zoom conversation with Carrington and other members of the group; this discussion will be moderated by Downbeat correspondent John Murph and renowned activist Susan Rosenberg . Together they will discuss the videos, the salient points, and lessons learned; they will give advice on how we as a concerned community can move forward as doers rather than followers.

While the first half of Saturday’s offering reflects the first, structured portion of their recent recording,  Waiting Game,  the second hour will begin with two open, improvised pieces. This reflects the second portion of their album: a four part, freely improvised suite called “Dreams and Desperate Measures.” As Terri said in the Berklee interview, “my goal was to go in to the studio and play for an hour without stopping, with no direction and to not do it twice – people are so used to hearing messages verbally that there’s not enough room left for the imagination.” Aaron Parks added “yes, there are many things that we’re against that we’re protesting. But there are also many things that we’re for: the idea of leaving room for each other, letting others take the lead, listening to each other and creating something together, that’s democracy in action.” For the Jazz Center’s livestream performance, the group will be dealing with the limits of latency (the delay that exists when communicating over the internet) because all the musicians will be performing from their own personal practice spaces spanning locations from Boston to Seattle. Carrington seems unfazed, or perhaps intrigued by the possibilities. In a recent phone call she said that, in this context, they will approach the freely improvised segment more like a conversation than a groove-based piece. All six of the band members will be featured in two separate offerings of about 10 minutes each. After the performance, the group will meet in a Zoom chat, moderated by VJC Director, Eugene Uman, to discuss the experience.
Day 2: Sunday, May 24th, 2:00 – 5:00 pm

On Sunday, May 24 th, the group will present three, separate, half-hour masterclasses followed by fifteen minutes of Q and A typed in by viewers on the VJC website and Facebook Live:

Empathetic embodiment, drawing from personal experience; conjoining the meaning of words with melodic choices; listening and communicating in the moment; piano and voice; singing and playing the notes, conjuring and transmitting feeling.

4:00 – 4:45 pm   Matthew Stevens and Morgan Guerin
“Collaboration: Becoming greater than the sum of our parts”

Terri Lyne Carrington is one of the top drummers in the world – she has toured with Wayne Shorter and Herbie Hancock, she has earned 3 Grammy Awards as a bandleader, she is the founder and director of the Berklee School of Music’s Institute of Jazz and Gender Justice. Her list of accomplishments is staggering, but really what sets Carrington apart is the way that she has used her life as a catalyst to do good work. In an interview with Berklee College, Carrington states “You can’t run away from who you are, so whenever I play or write something, the whole of me has to be there. So if I’m improvising I’m still the same person who is pissed off about what’s going on in this country. I might play something pretty but it still comes from the core of where ever I am personally at this particular moment.”

At Berklee and through her visionary recording projects, Carrington has created a collaborative environment that fuses her commitment to social justice and education with her work as a creative artist. Through her big-picture projects, she has built an inclusive culture that both challenges and inspires others to act. She provokes us to see things as they are, encourages us to make changes within ourselves and calls for us to stand up for what is righteous. Ultimately, Carrington’s work is focused on creating a society that is more caring, inclusive and equitable, especially to those who have been systematically mistreated and distained.

Terri Lyne Carrington’s more recent projects have all bridged the narrow gap between music and activism, but her most recent, Waiting Game, is especially ambitious. Material from this double album will be featured during her online performance via the Vermont Jazz Center. The music of Social Science is about social justice. In a video-interview about the project, the group’s guitarist, Matt Stevens, said “calling the band Social Science lets us talk about a wide variety of things that we want to talk about – equal opportunity, equal access to wealth, education and other issues that we are now dealing with in the world today.” Topics covered on the disk include the plight of political prisoners, homophobia, police brutality, indigenous rights, and misogyny. Although there is anger in the message, the music is beautiful, it expresses the yearning for people to be treated with dignity, for human rights to be observed and to draw attention to the disparities that woefully exist. The work is imbued with empathy.

Pianist Aaron Parks came to the public’s attention during his tenure with trumpeter Terence Blanchard. Born in Seattle, Washington, he began playing piano at a young age and by the time he was 14 had enrolled in an early entrance degree program at the University of Washington. By the age of 16 he had transferred to the Manhattan School of Music. While there, he studied with Kenny Barron and received several competitive accolades, including being named the 2001 Cole Porter Fellow of the American Pianists Association. At age 18 he joined Terrence Blanchard’s ensemble and recorded four albums including the 2007 Grammy-winning disk,  A Tale of God’s Will (A Requiem for Katrina) . Parks has released numerous albums as a leader and has also recorded with Kurt Rosenwinkel, Dayna Stephens, Christian Scoot, Kendrick Scott, Gretchen Parlato, Ambrose Akinmuire, Kurt Rosenwinkel, Joshua Redman, Billy Hart, Ben Wendel and many others.

Guitarist Matt Stevens was a featured artist in DownBeat Magazine’s 2016 For the Future issue and since then has twice placed in their Annual Critics Poll Rising Star Guitar Category. He has released three highly acclaimed albums as a leader and has recorded with Christian Scott, Terri Lyne Carrington, Harvey Mason, ERIMAJ, Sean Jones, Walter Smith III, Linda Oh, The NEXT Collective and Esperanza Spalding.

Vocalist Debo Ray (Deborah Pierre) is a graduate of Berklee College of Music. She sings with the international group Women of the World, Senegalese Afro-beat fusion band Group Saloum, Banda Magda, and many others. Currently, she is working on an original project, combining influences from classical, jazz, rock, electronic, and traditional Haitian music.

New York City-based multi-instrumentalist Morgan Guerin has collaborated and recorded with Esperanza Spalding, Tyshawn Sorey, Kassa Overall and Terri Lyne Carrington. He performs on bass, saxophones, electronic wind instrument (EWI), drums and keys. The 21 year-old has one album out as a leader called Saga. Dubbed a “wunderkind saxophonist and multi-instrumentalist” by The New York Times, Guerin studied at Berklee College of Music and The New School.

The work of vocalist/drummer Kassa Overall ranges from jazz to hip-hop and indie-pop to avant-garde. Overall was an integral part of legendary pianist Geri Allen’s Timeline band, touring throughout the U.S. and Europe. He has made an impact on the indie-pop scene, touring with artists such as Francis and The Lights, Gordon Voidwell, TECLA and Mayer Hawthorne and the County. Laptops and samplers are key elements to Overall’s signature sound. He has toured extensively with his own band, fusing his jazz and instrumental training with his passion for contemporary electronic music. Overall graduated from the Oberlin Conservatory of Music (BM) where he studied under jazz drum legend Billy Hart. Overall has recorded with Theo Croker, Vijay Iyer, Das Racist, Wallace Roney, Ravi Coltrane, Billy Hart, Gary Bartz, Yoko Ono, Iron Solomon, Gordon Voidwell, and many others.

In a recent interview with DownBeat’s Kira Gunberg, Carrington was asked how she inspires her students to both attain their full musical potential and engage with today’s complex sociopolitical environment. Carrington replied: “It’s a very exciting time because everybody’s feeling something. You have to have the courage to talk about it and dive deeper, sometimes educate yourself more or figure out that connection between or how you bridge your beliefs and your music. Some people write social justice music and the themes might be great, the social content might be great but, the music may not be great. So, I think it’s important to hone your craft as a composer, as a player, as a total artist.” This response relates to Carrington’s motto: It’s about knowing oneself and discovering ones’ purpose. Carrington’s purpose is intrinsically connected to doing good in the world: she lives and communicates with rare clarity and this is reflected in the way she produces her events, educates her students, and plays her instrument -the Vermont Jazz Center is honored to be a channel for her message.

Livestreaming for this event is cost-free and open to the public. Donations to the Vermont Jazz Center will be gratefully accepted.
+ Google Calendar+ Add to iCalendar