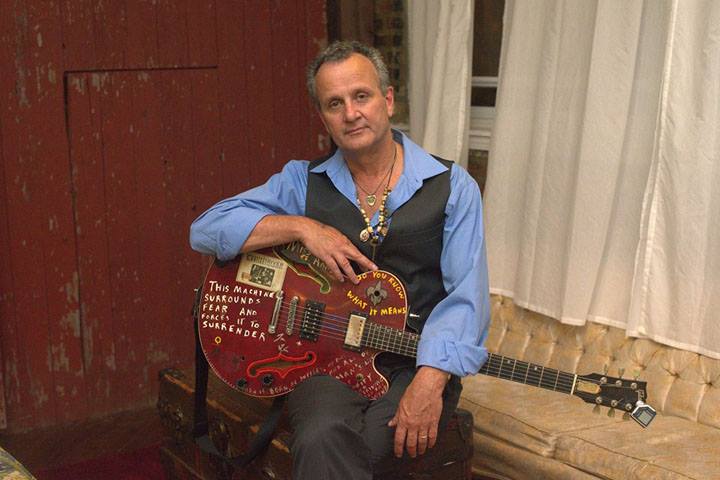 The Big Easy in Buffalo presents Paul Sanchez for a solo evening of songs and stories on Friday, July 6 at the brand new Duende at Silo City! Bill Smith of Ten Cent Howl is opening. This is a free show (we’ll pass the hat with all donations going to Paul).

The Big Easy in Buffalo – a program of Arts Services Initiative of WNY, Inc.– is sponsored by the New York State Council on the Arts with the support of Governor Andrew Cuomo and the New York State Legislature, Fund for the Arts, Erie County, Adams Mark Hotel & Events Center, and Silo City.

More about Paul:
Fans may know native New Orleanian Paul Sanchez as a founding member of the rock band Cowboy Mouth, with whom he has 11 albums; for his role in the HBO series Treme where he played himself; or as the creative force behind the musical NINE LIVES, a musical adaptation of the best-selling novel by Dan Baum. NINE LIVES follows the lives of nine people in New Orleans from 1965 (the year Hurricane Betsy ravaged the city) through 2005 (the year of Hurricane Katrina) and beyond.

Paul Sanchez transforms audiences with his unique blend of music and storytelling – at once powerful, sad, humorous, entertaining, and hopeful.

Like many New Orleanians, Paul was tremendously impacted by Hurricane Katrina, having lost his home. “I lost my home, my possessions, community and, eventually, my job after the flood. I was changed, am changed as a person and it couldn’t help but change my music”, confesses Sanchez, who like many struggled to find a new identity after Hurricane Katrina. After much soul-searching, he left Cowboy Mouth to go solo.

Paul Sanchez began writing songs and playing his first professional shows in the French Quarter before he turned sixteen. By the 1980’s, Paul was an established part of the New Orleans rock scene, playing in The Backbeats along with Vance DeGeneres, another native New Orleanian.

He lived in New York City in the late 80’s and was part of the now legendary Anti-Folk scene in the East Village.

OffBeat Magazine awarded Paul Songwriter of the Year 2014, he won three Best of The Beat Awards n 2010: Songwriter of The Year, Best Song of The Year, Best Folk/Rock Album for Stew Called New Orleans, his duet record with friend and collaborator John Boutte. In April of that same year, Gambit Weekly awarded him Best Roots Rock Performer at The Big Easy Awards.

Primarily a songwriter Sanchez has written songs for Darius Rucker, had a song in the country charts which was recorded by The Eli Young Band, and a song covered by Irma Thomas, the Soul Queen of New Orleans. Paul resides in the Treme neighborhood, where he sings and breathes everything, New Orleans.