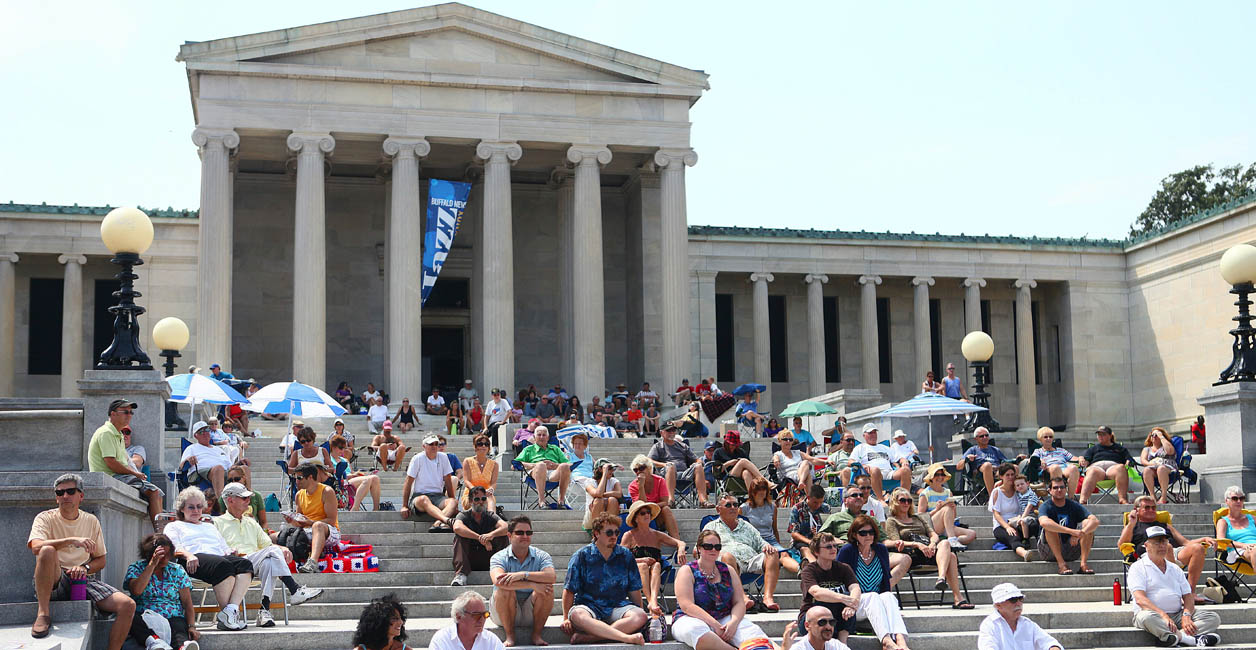 The Buffalo News Summer Jazz Series concerts take place on the museum’s Delaware Stairs on five Sundays at 2 pm, from July 7 through August 4. Admission is free. Bring the whole family to enjoy this summer tradition!

Please note: In case of rain, performances will be held in the Albright-Knox’s Auditorium on a first-come, first seat basis. Indoor concerts are free with museum admission (and free for Albright-Knox Members). 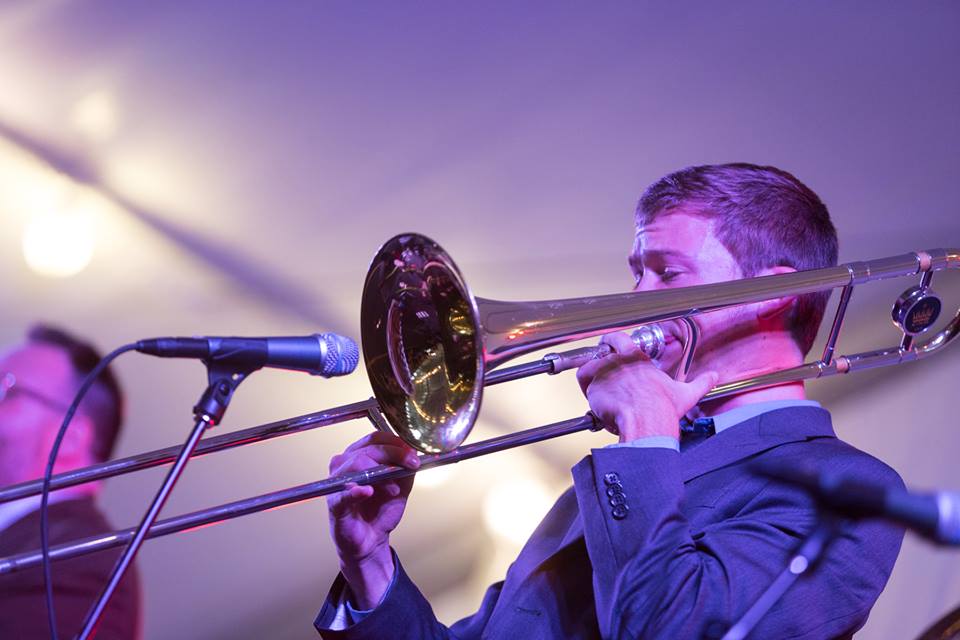 The Brendan Lanighan Sextet is comprised of experienced and talented Western New York jazz musicians who are dedicated to creating memorable and inclusive jazz concerts for all ages by playing tunes from Dixieland to Disney themes. The exciting three-horn lineup of Lanighan on trombone, Mark Filsinger on the trumpet, and saxophonist Elliot Scozzaro packs the punch of a big band with the sensibility of a chamber jazz ensemble. Lanighan is a proud native of Buffalo and holds degrees from the Eastman School of Music. Since his time there, he has led his own groups and has toured with a wide range of acts, including the Glenn Miller Orchestra, Doc Severinson, and Gordon Webster and his All Stars. He is currently pursuing a Master’s degree at the Juilliard School. 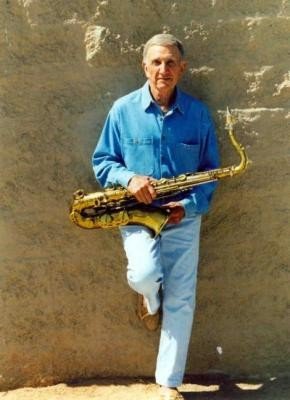 A native of Omaha, Nebraska, Don Rice became a professional musician at the age of 14, and traveled with Midwest territory bands until entering college, where he headed campus jazz groups at the University of Nebraska. In the 1960s, he formed the Don Rice Jazz Workshop Band, a sixteen-piece group that gave concerts throughout the Midwest. Appearances included the Kansas City Jazz Festival, the Joslyn Art Museum in Omaha, the University of Nebraska Student Center, and a major concert with the Four Freshmen in the Omaha Civic Auditorium.

In 1990, Rice moved to Rancho Mirage, California, and he has been a jazz fixture in Southern California since that time. Beloved by Stan Lipsey, he has been a perennial favorite featured at The Buffalo NewsSummer Jazz Series at the Albright-Knox. He also has appeared several times at the Mammoth Lakes Jazz Festival in Northern California. Over the years he has performed with Frankie Carle, George Kirby, Bob Crosby, the Ink Spots, the Maguire Sisters, Barbara Mc Nair, the Mills Brothers, Herb Jeffries, the Four Freshmen, Buddy Greco, the Abe Most Band, Conte Candoli, and Tiemey Sutton. 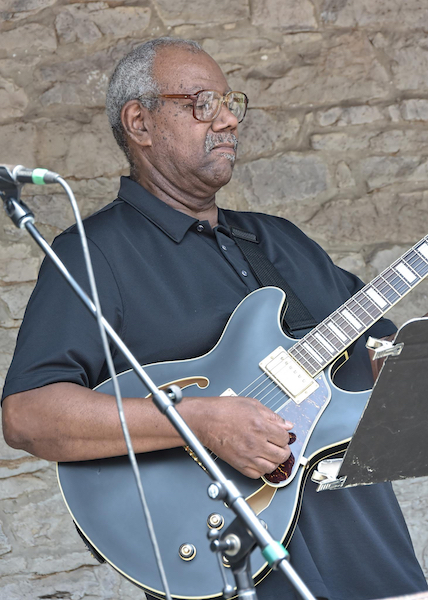 The Greg Millar Quintet will re-create the classic Riverside Records album Bags Meets Wes, which featured two of the greatest jazz artists in the history of music: Milt Jackson, affectionately known as “Bags,” and John L. Montgomery, known more popularly as “Wes.” These artists combined their talents with the great rhythm-section team of Wynton Kelly, Sam Jones, and Philly Joe Jones in December 1961 to create a swinging session of standards and originals.

The Millar Quintet will present their recorded material, along with extra compositions associated with Jackson and Montgomery to round out this program, which is guaranteed to please all jazz audiences. 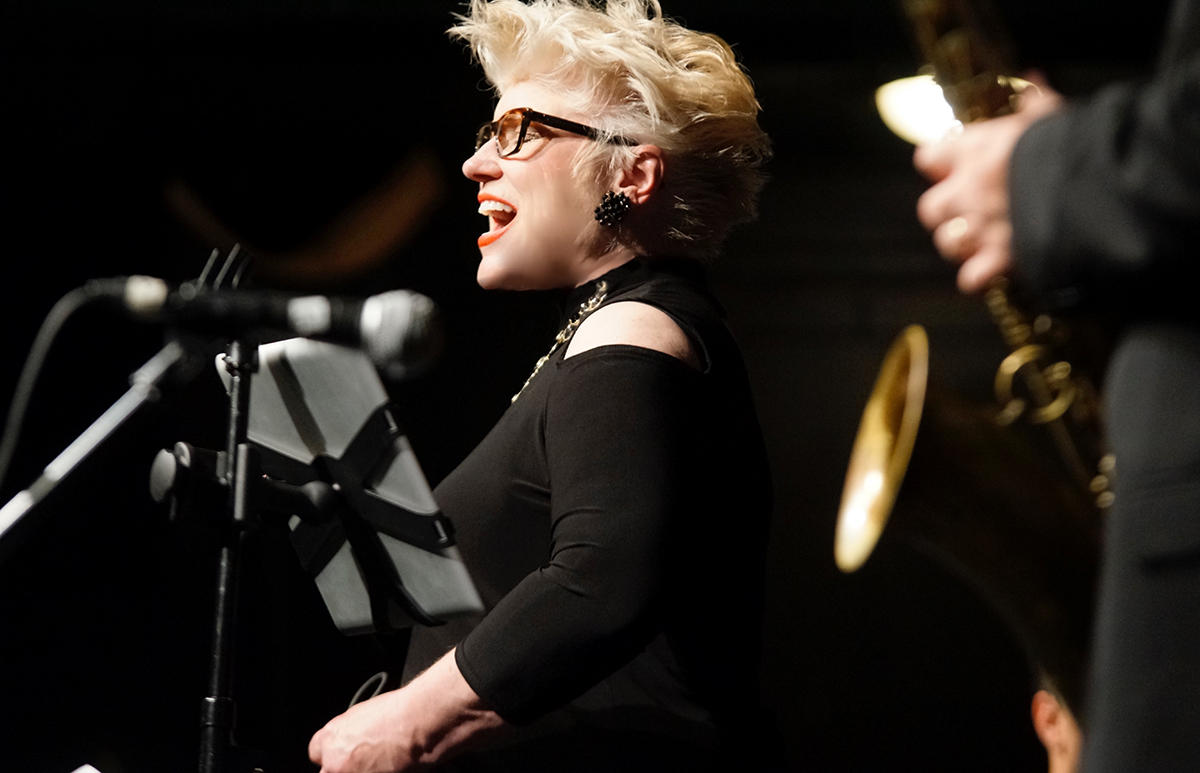 Bobby Militello is a prolific artist who has played with many jazz legends for the last five decades, along with leading his own groups. From 1982 to 2012 he played alto and flute with the Dave Brubeck Quartet, recording more than 20 albums; played with almost every major orchestra in the U.S., Canada, and Europe; and appeared in many international jazz festivals and on many television and radio shows.

From 1975 to 1979, Militello played with Maynard Ferguson on baritone sax and flute. During his tenure with Ferguson, he appeared in the Downbeat Readers polls from 1976 to 1979 on baritone and flute, receiving critical acclaim. In 1982, Rick James, who lived in Buffalo, heard Militello’s fusion group, RPM. After coming to many gigs, James set Militello up with a contract with Motown Records to record his first solo funk-R&B album Bobby M Blow. Three more solo albums would follow.

In 1991, Militello moved back to Buffalo and became a contract player for the Buffalo Philharmonic Orchestra, where he began playing for Doc Severinson. This led to him joining Doc in various orchestra concerts around the country and then to a chair in The Tonight Show Band playing tenor, clarinet, and flute.

In 2014, Militello formed the Bobby Militello Quartet with Jim Colemon on bass; Bobby Jones on keyboards; and John Bacon, Jr. on drums. This band performed at the 2014 Monty Alexander Jazz Festival, and continues to play many other concerts and local venues. Militello has been on more than 250 recordings and various television and film scores.

Don Menza is a powerful tenor saxophonist, with a dynamic and distinctive sound and soloing style. Born in Buffalo, in 1936, Menza started playing tenor saxophone when he was 13. After his service in the Army, he worked with Maynard Ferguson’s Orchestra (1960–1962) as both a soloist and an arranger. From 1964 to 1968 he performed in Germany with Stan Kenton. In 1968 he joined Buddy Rich’s Big Band in the “jazz tenor” chair, recording the famous solo cadenza on “Channel 1 Suite” (recorded “live” at Caesar’s Palace), where he utilized a circular breathing technique that has become well known among musicians and music educators.

He settled in California and has worked with Elvin Jones and Louie Bellson and succeeded as an educator and studio musician. Menza recorded as a leader for Saba (1965) in Germany, Discwasher (1979), Realtime, and Palo Alto. Don was a long-time member of The Tonight Show Band, with Johnny Carson. His compositions, “Groovin’ Hard” and “Time Check,” both favorites of Doc Severinsen’s NBC Orchestra and Buddy Rich’s Big Band, have become standard repertoire in jazz study programs at many colleges and universities. In 2005, Menza was inducted into the Buffalo Music Hall of Fame.