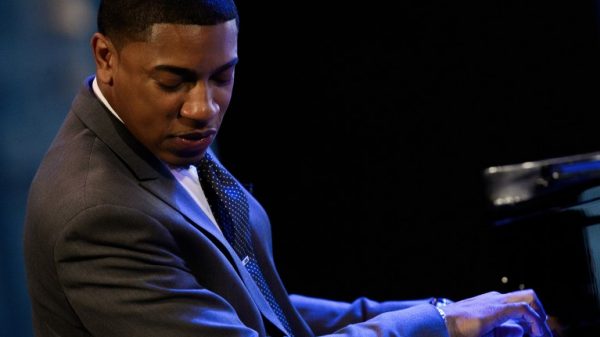 Sands’ piano promise was recognized from a young age and his teachers have included Dr. Billy Taylor, Dave Brubeck, Jason Moran, and Vijay Iyer. He gained wide acclaim after Christian McBride added him to his group Inside Straight where he stayed for six years. The New York Times says, “Sands is already known as one of the most commanding pianists of jazz’s young generation, a gospel-infused technician with contemporary sensibilities and a deeply rhythmic approach.” Downbeat calls him, “an imaginative composer, a clever arranger and a skillful technician with a fluid style.” This trio promises a special evening as wbgo.org raves about “the effortless hookup Sands has with bassist Yasushi Nakamura and drummer Clarence Penn.”

This is how it works:
The performances will be delivered via a safe and secure, private YouTube stream. Simply purchase a streaming pass from InstantSeats (click the Get Tickets button ) and you will receive an e-mail to a “locked and secure” pre-event screen. A countdown clock will show when your event codes will be revealed. After the code is revealed, another clock will show the live stream start time. We highly recommend that you listen on speakers or wired headphones as wireless headphones could cause a delay between audio and video. Note that each stream (Friday & Saturday) will be available for 24 hours only after the start of each performance to allow audiences in different time zones or with scheduling conflicts to watch these streams at their convenience.