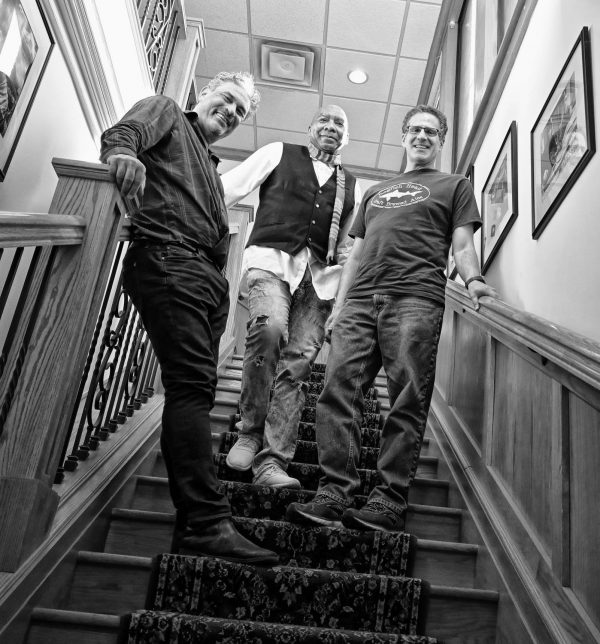 Blending spirituals, Latin jazz, 60 and 70s pop, bossa nova and straight ahead jazz, the Cousins Trio enthralls audiences of all ages. Whether it is the virtuosity of Gardner’s piano solos, the artistry of Quadir’s drumming or the versatility of Cousins’ bass playing, a concert will transport the listener to an alternative reality. The repertoire of the Cousins Trio includes compositions by Paquito D’Rivera, Gershwin, Cannonball Adderly, Jobin, Horace Silver, Hank Mobley, Stevie Wonder, Sade, Phil Collins and many more. Classics like Summertime, This I Dig of You, Smooth Operator, Work Song, A Felicidade, Speak Low and My Romance are often featured on a typical set list.
Marc Cousins (Leader and Bass)
Founder of Cousins Trio. Paris born bassist, arranger. Marc started his musical studies in Brussels, Belgium. He received his Bachelor degree in Jazz Performance from Arizona State University and attended North Texas State University for graduate work in music. He has toured the US and Europe with a variety of musical groups and has lived in Orlando, Dallas and NYC. He currently resides in Buffalo, where he has performed with a variety of local ensembles such as the Buffalo Philharmonic Orchestra, the French ConeXion and many others.
Jim Gardner (Piano)
Born into a family of musicians, Jim Gardner studied classical and jazz piano and music theory at the Westchester Conservatory of Music, before going on to study with Johnny Morris, long-time pianist for Buddy Rich and later house pianist at Jimmy Ryan’s in NYC. In college, Jim was a member of the Yale Jazz Ensemble under the direction of Willie Ruff, a former member of the Miles Davis Orchestra. For the last dozen years, Jim has performed around Western New York, often with Marc.
Abdul-Raman Qadir (Drums)
With a career spanning forty-plus years, Abdul has had the honor and privilege of working with national and a majority of area musicians in a variety of venues. Musical luminaries he’s worked with include: Dizzy Gillepsie, Freddie Cole, Regina Carter, Dakota Staton, Dodo Greene, the legendary Al Tinney and many others. He has taught and performed in the Buffalo Public Schools and the Catholic Diocese as well as the Arts in Education Institute of WNY as a teaching artist. Abdul also had the honor of appearing in the movie Marshall as a member of the band. Known for his distinctive swing style of jazz drumming, he has also performed in musical theater, opera productions, and with the Buffalo Philharmonic Orchestra. His belief is that Music has no boundaries.
+ Google Calendar+ Add to iCalendar