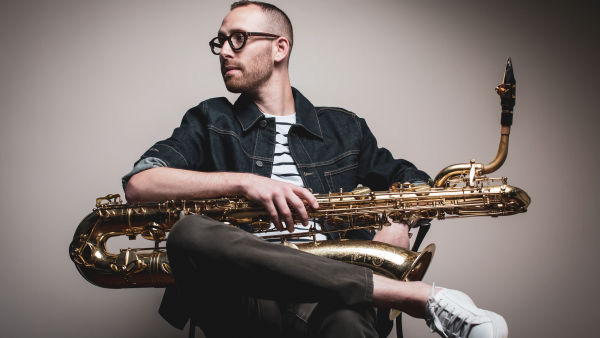 Marking the release of the album Hodges: Front & Center, saxophonist Owen Broder and his quintet pay tribute to Johnny Hodges, the lead alto saxophonist of the Duke Ellington Jazz Orchestra and band leader in his own right. With this program, culling pieces from both the Ellington repertoire as well as from the saxophonist’s often overlooked catalogue of small group albums and collaborations with jazz luminaries including Clark Terry, Ben Webster, and Gerry Mulligan, you will experience the beauty and elegance of the original arrangements, with a deeply felt modern vibrancy in these fresh interpretations.

Owen Broder is a saxophonist and bandleader based in New York City. With his own ensembles as well as groups such as the Anat Cohen Tentet and the Gil Evans Project, Broder actively tours the U.S. and Europe, including performances at Carnegie Hall, the Newport Jazz Festival, and Umbria Jazz Festival. His albums have received critical acclaim, with a four-star review from DownBeat and earning him the title of 2018 Debut Artist of the Year [Francis Davis, NPR]. Broder was a recipient of the 2018 ASCAP Herb Alpert Young Jazz Composers Award, a commission from the International Society of Jazz Arrangers and Composers in 2020, and the 2021 Artpreneur of the Year Award from UNCSA.

Described as “one of the most compelling voices to emerge on her instrument in recent years” (Dan Bilawksy, All about Jazz), Australian-born based trumpeter/composer Nadje Noordhuis possesses one of the most unforgettably lyrical voices in modern music. Noordhuis was one of ten semi-finalists in the 2007 Thelonious Monk International Jazz Trumpet Competition and was selected as a Carnegie Hall Young Artist in 2010. Based in New York since 2003, she is a member of the multiple Grammy-winning Maria Schneider Orchestra, Grammy-nominated Darcy James Argue’s Secret Society and Anat Cohen Tentet.

Pianist/composer Carmen Staaf is a rising force in the NYC and global music scenes. She has performed and recorded with some of the most influential and important musicians of our era. Currently, she is the pianist and Musical Director for NEA Jazz Master Dee Dee Bridgewater. Her past major performances have included the Playboy Jazz Festival in a two-piano setting with the legendary Herbie Hancock and Wayne Shorter, Jazz at Lincoln Center with Wynton Marsalis and the Lincoln Center Jazz Orchestra, and the Kennedy Center alongside Kenny Barron and Fred Hersch.

New York City-based acoustic/electric bassist and composer Barry Stephenson has been acclaimed as “one of the most sought-after bassists on the scene today.” Released in 2020, Barry’s The Iconoclast was nominated for the NAACP Image Award® for Outstanding Jazz Album (Instrumental), and was notably the only independently-produced album in a category that included work by Jon Batiste, George Burton, Christian Sands, and Immanuel Wilkins. The Iconoclast was also named by Offbeat magazine as one of the Top 50 Albums of 2020.

Israel-born and Brooklyn-based Dan Pugach is a GRAMMY® nominated drummer and composer living in Brooklyn, NY. The Dan Pugach Nonet performs his compositions and arrangements and appears at internationally respected jazz clubs, performing arts centers, and festivals, including Bird’s Eye Basel, The Zone (Tel Aviv), Blue Note Jazz, The 55 Bar, Smalls Jazz Club, The Jazz Loft, The Jazz Estate, and the Stowe Jazz Festival. Pugach was a recipient of the ASCAP Foundation Young Jazz Composer Award in 2011 and 2013, a selected member of the 2011 Betty Carter Jazz Ahead Residency Program at the Kennedy Center, and the 2019 BMI Charlie Parker Composition Prize/Manny Albam Commission as part of the BMI Jazz Composers Workshop.