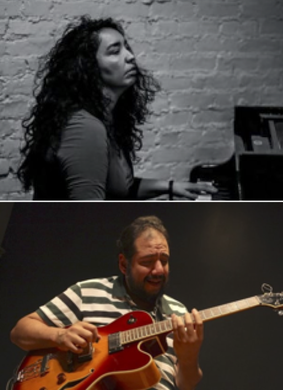 In this concert, Tierra Mestiza – the US pianist Angélica Sánchez and the Mexican guitarist and multi-instrumentalist Omar Tamez – will present a collection of compositions from three Latin countries connected by the social action and protest against tyranny.  From Brazil, the legendary Chico Buarque spent a big part of his life in exile for his social activism during the seventies and eighties. His music is a wonderful mix of Brazilian folklore, pop music, and Jazz.

From Argentina, two of the major voices. Firstly, Héctor Roberto Chavero is better known as Atahualpa Yupanqui, his Quechua name. He has been in jail more than once because of his connection with the communist party in Argentina and his opposition to the ideas of the president Juan Domingo Perón. After he was exiled in Uruguay and Brazil he moved to France and worked with the famous singer Edith Piaf.  Secondly, from Argentina, the pianist and composer Gustavo “Cuchi” Leguizamon was famous for his zambas, chacareras, carbavalitos, vidalas and bagualas. He was known as the “Thelonious Monk of the South”.

Finally, from Mexico, the music of Mario Ruiz Armengol will be presented. He lived in exile in New York City for many years and was known as “Mr. Harmony.” That was the nickname Duke Ellington gave him. Ruiz Armengol was famous as “teacher” of many Jazz legends such as George Russell, Gil Evans, Yusef Lateef and Ellington.

The connections with this music were made by Omar Tamez, first as a Mexican studying the ethnic and folk music of his own country, secondly, living and playing with many musicians from Argentina, and finally playing for the last eight years with the maestros Chico Buarque, Milton Nascimento and Hermeto Pascoal to name few.
Tierra Mestiza is proud to share some of the most beautiful music from the south side of the American continent today in Buffalo.