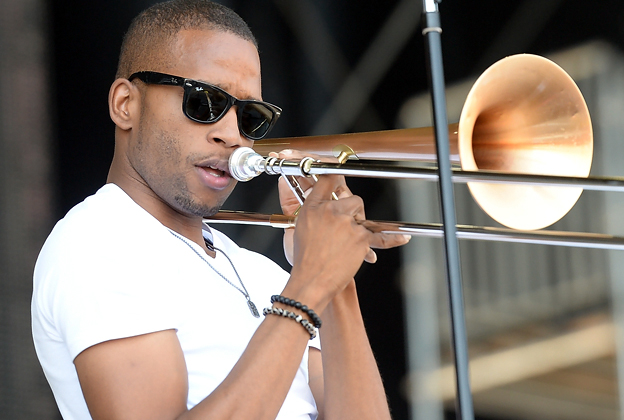 Trombone Shorty’s new album opens with a dirge, but if you think the beloved bandleader, singer, songwriter and horn-blower born Troy Andrews came here to mourn, you got it all wrong. That bit of beautiful New Orleans soul—”Laveau Dirge No. 1,” named after one of the city’s most famous voodoo queens—shows off our host’s roots before Parking Lot Symphony branches out wildly, wonderfully, funkily across 12 diverse cuts. True to its title, this album contains multitudes of sound—from brass band blare and deep-groove funk, to bluesy beauty and hip-hop/pop swagger—and plenty of emotion all anchored, of course, by stellar playing and the idea that, even in the toughest of times, as Andrews says, “Music brings unity.”

As for why it’s taken Andrews so long to follow 2013’s Raphael Saadiq-produced Say That to Say This, the man simply says, “I didn’t realize so much time passed. Some artists don’t work until they put a record out but I never stopped going.” Truly. In the last four years, Andrews banked his fifth White House gig; backed Macklemore and Madonna at the Grammys; played on albums by She & Him, Zac Brown, Dierks Bentley, and Mark Ronson; opened tours for Daryl Hall & John Oates and Red Hot Chili Peppers; appeared in Foo Fighters’ Sonic Highways documentary series; voiced the iconic sound of the adult characters in The Peanuts Movie; inherited the esteemed annual fest-closing set at the New Orleans Jazz & Heritage Festival in the tradition of Crescent City greats like the Neville Brothers and Professor Longhair; and released Trombone Shorty, a children’s book about his life that was named a Caldecott Honor Book in 2016.

Adding to that legacy, his Blue Note Records debut Parking Lot Symphony finds Andrews teamed with Grammy-nominated producer Chris Seefried (Andra Day, Fitz and the Tantrums) and an unexpected array of co-writers and players including members of Edward Sharpe & The Magnetic Zeros, The Meters, Better Than Ezra, and Dumpstaphunk. Considering Andrews’ relentless schedule, it’s all the more surprising that this LP began with him in a room, all alone, back in New Orleans.

“I had two weeks at home so I went to the studio and set up the ‘playground,'” he recalls. “I had everything in a circle: tuba, trombone, trumpet, keyboard, Fender Rhodes, Wurly, B3 organ, guitar, bass, drums—and me buried in the middle.” He recorded an album’s worth of ideas and then, well, walked away for a year. Not because he was too busy, but because he wanted to hit the road and see how the music changed on him. When Andrews came back with a full band, the songs came to life.

Take the album’s two covers, a pair of NOLA deep cuts: there’s “Here Comes the Girls,” a 1970 Allen Toussaint song originally recorded by Ernie K-Doe that here (with Ivan Neville on piano) sounds bawdy and regal, like something from a current Bruno Mars album; and The Meters’ lovesick “It Ain’t No Use,” which swirls a vintage R&B vibe with resonant choir vocals and upbeat guitar from The Meters’ Leo Nocentelli himself to transport the listener to the center of the jumpingest jazz-soul concert hall that never was.

The story there is almost too good. The session band—guitarist Pete Murano, sax men Dan Oestreicher and BK Jackson, and drummer Joey Peebles with Dumpstaphunk’s Tony Hall in for Orleans Avenue bassist Mike Bass-Bailey—were in the studio to lay down “It Ain’t No Use.” Hall even had the vintage acoustic he bought from Nocentelli years ago, which was used on the original Meters session. On the way to the bathroom, Andrews saw Nocentelli coming out of a different tracking room: it was meant to be.

But that’s not unusual for a man raised in one of the Tremé’s most musical families. Andrews got his name when he picked up his instrument at four (“My parents pushed me toward trombone because they didn’t need another trumpet player,” he laughs). By eight, he led his own band in parades, halls and even bars: “They’d have to lock the door so the police couldn’t come in.” Promoters would try to hand money to his older cousins, but they’d kindly redirect them to the boy. In his teens, Andrews played shows abroad with the Neville Brothers. Fresh out of high school (New Orleans Center for Creative Arts) he joined Lenny Kravitz’ band.

Across that time, three Trombone Shorty albums and many collaborations since, Andrews nurtured a voracious appetite for all types of music—a phenomenon on fluid display with Parking Lot Symphony. On “Familiar,” co-written by Aloe Blacc, they practically mint a new genre (trap-funk?) while Andrews channels his inner R. Kelly to spit game at an old flame. Meanwhile, the instrumental “Tripped Out Slim” (the nickname of a family friend who recently passed) bends echoes of the Pink Panther theme into something fit for James Brown to strut to. And if you listen closely to “Where It At?,” written with Better Than Ezra’s Kevin Griffin, you may even hear a little Y2K pop. “I know it wasn’t cool to listen to *NSYNC or Britney Spears in high school,” says Andrews, “but those bass lines and melodies are funky.” They pair astonishingly well with all the Earth, Wind & Fire that bubbles beneath these songs.

It’s worth noting that Andrews’ vocals sound better than ever (he credits Seefried for that), because Parking Lot Symphony might be the man’s most heartfelt offering yet. The breezy title track, which Andrews wrote with Alex Ebert (Edward Sharpe & The Magnetic Zeros), is as much about walking the Tremé, being uplifted by the music that seems to seep from every surface, as it is about moving on from a broken heart. And the shuffling, bluesy “No Good Time” reminds us, with a world-weary smile, that “nobody never learned nothin’ from no good time.”

But Andrews is clear that this isn’t some kind of breakup record. “It’s a life record,” he says, “about prevailing no matter what type of roadblock is in front of you.” That message is clearest on “Dirty Water,” where over an easy groove, Andrews adopts a soft falsetto to address just about anyone going through it—personal, political, whatever. “There’s a lot of hope turning to doubt,” he coos. “I’ve got something to say to them / You don’t know what you’re talking about / When you believe in love, it all works out.” Amen. Now let the horns play us out.

There is deep soul in the music of Devon Gilfillian—but for the talented Nashville-based singer-songwriter and bandleader, that descriptor goes way beyond a mere genre classification. Growing up in Philadelphia on a steady diet of R&B, hip-hop, rock, blues, and soul music, Gilfillian gravitated to records that ignited his mind while making his body move. For him, listening to the towering icons of his musician father’s era—Ray Charles, Stevie Wonder, Otis Redding, The Temptations—was just as formative and exciting as discovering the new sounds of his own generation, and the beats and rhymes made by rising rap stars like Wu-Tang Clan, Kanye West, Notorious B.I.G., and Jay-Z inspired him in new ways. He began to recognize a connective thread in the sounds he loved best: from the golden throwbacks sampled by the hip-hop beat makers to the raw, emotional vocal deliveries of the Motown greats, for Gilfillian the key ingredient seemed to be the “soul”—not simply the genre, but the feeling and vibe.

Following his electrifying 2016 debut EP with upbeat singles like “High” and “Troublemaker” in 2018, Gilfillian signed to Capitol Records and hit the road––performing with the likes of Anderson East, Keith Urban, Gladys Knight, Kaleo, The Fray, Mavis Staples, and more. In early 2019, Gilfillian traveled to Africa to find healing and inspiration before headlining a tour in Scandinavia and opening for Brothers Osborne on their spring tour. His latest single “Get Out and Get It” off of his forthcoming full-length record is available now.