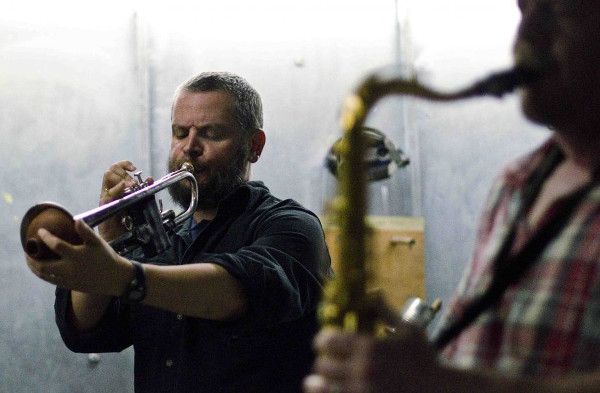 Ken Vandermark & Nate Wooley had been operating in each other’s orbits for several years, having worked together with Paul Lytton, Joe Morris, Agusti Fernandez, and Terrie Ex, before putting together their duo project in October 2013 when they toured the United States for the first time. With this unique ensemble, they deal directly with each other’s iconoclastic compositional and improvisational vocabularies, and have created a book of original material that takes inspirational cues from the under-appreciated work of John Carter and Bobby Bradford.

Vandermark and Wooley have worked together to create an organic combination of the jazz tradition, free improvisation, and modern composition, and have then placed it into the raw and intimate context of this duo.

Born in Warwick, Rhode Island on September 22nd, 1964, Ken Vandermark began studying the tenor saxophone at the age of 16. Since graduating with a degree in Film and Communications from McGill University during the spring of 1986, his primary creative emphasis has been the exploration of contemporary music that deals directly with advanced methods of improvisation. In 1989, he moved to Chicago from Boston, and has worked continuously from the early 1990’s onward, both as a performer and organizer in North America and Europe, recording in a large array of contexts, with many internationally renowned musicians (such as Fred Anderson, Ab Baars, Peter Brötzmann, Tim Daisy, Hamid Drake, Terrie Ex, Mats Gustafsson, Devin Hoff, Christof Kurzmann, Fred Lonberg-Holm, Joe McPhee, Paal Nilssen-Love, Paul Lytton, Andy Moor, Joe Morris, and Nate Wooley). His current activity includes work with Made To Break, The Resonance Ensemble, Side A, Lean Left, Fire Room, the DKV Trio, and duos with Paal Nilssen-Love and Tim Daisy. More than half of each year is spent touring in Europe, North America, and Japan, and his concerts and numerous recordings have been critically acclaimed both at home and abroad. In addition to the tenor sax, he also plays the bass and Bb clarinet, and baritone saxophone.

New York-based American trumpeter Nate Wooley (b. 1974) has performed on over 100 recordings. Increasingly acknowledged internationally, Wooley’s specific style is part of a burgeoning revolution in experimental trumpet technique. His own compositions expand conceptions of linguistic based embouchure manipulation and utilize the trumpet to control amplified feedback. He has performed regularly with such icons as John Zorn, Anthony Braxton, Eliane Radigue, Ken Vandermark, Fred Frith, Evan Parker, and Yoshi Wada, as well as being a collaborator with some of the brightest lights of his generation like Chris Corsano, C. Spencer Yeh, Peter Evans, and Mary Halvorson.