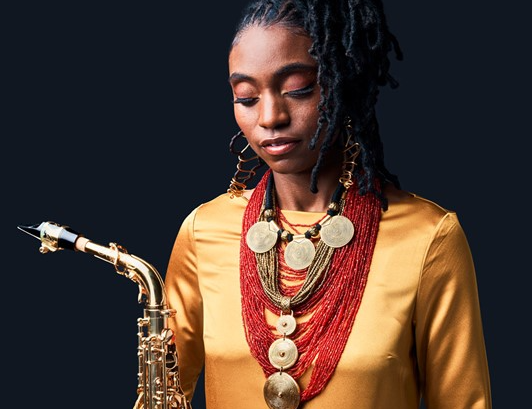 Italian guitarist, Pasquale Grasso has been lauded by Pat Metheny as “one of the best guitarists I’ve ever heard.” He was mentored by the legendary bebop pianist/educator Barry Harris, serving as his teaching assistant for the last ten years in workshops in Italy, Switzerland, France, Spain, Holland, and Slovenia. As a Jazz Ambassador for the US Embassy, Grasso toured Europe, Kuwait, Kazakhstan, Cyprus, Lithuania, and Ukraine. Grasso has performed with Charles Davis, Freddie Redd, Frank Wess, Leroy Williams, Ray Drummond, Steve Grossman, Tardo Hammer, Jimmy Wormworth, John Mosca, Chris Byars, Pizzarelli, Harry Allen Quartet, Grant Stewart and many others.

Pasquale Grasso: “One of the best guitarists I’ve ever heard” – Pat Metheny

Alto saxophonist Lakecia Benjamin won the 2019 Downbeat Critic’s Poll Rising Star Award as well as the Jazz Journalist’s Award for Up and Coming Jazz Musician of the Year. She recently recorded Pursuance, a tribute to the Coltranes (Alice and John) which was produced by her “god father” and mentor Reggie Workman (who also served as John Coltrane’s bassist). The sublime character of that recording is not that it is merely a tribute to Coltrane, but that she captures the spirit, the fire and the essence of their music, channeling their authentic tradition while infusing it with young energy and influences. Benjamin will be performing material from this recording in a pre-filmed, exclusive-content concert at the VJC. She says “Our job is to heal and spread joy throughout the planet. That’s the reason I play music.”

A new highlight for this year’s festival is the presentation of 5-minute videos from college, high school and youth jazz ensembles. We will present videos from approximately ten student groups performing in situations that reflect the creativity of working within the limits of social distancing.

Lakecia Benjamin and Reggie Workman come together to discuss her recent project dedicated to the music and profound influences of Alice and John Coltrane.  Eugene Uman moderates.