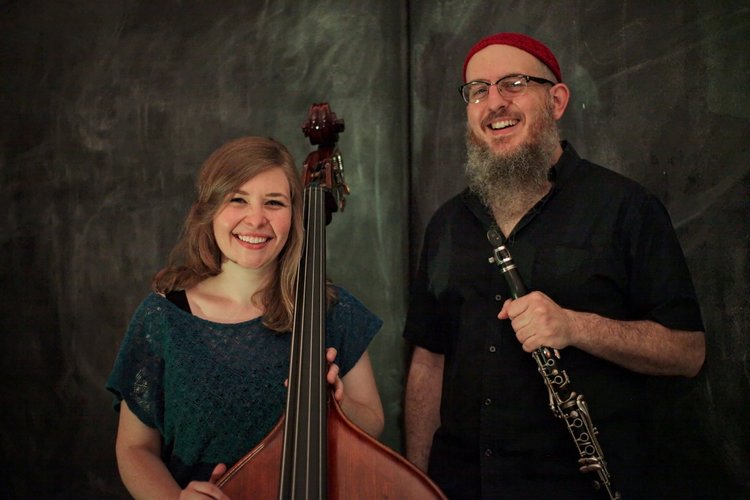 Taking its name from a beloved American folk song, Wayfaring is a duo project between bassist/vocalist Katie Ernst and clarinetist James Falzone. What began as a casual meeting between like-minded players has formed into a collective of unusual nuance and depth, drawing on source material from the jazz tradition, hymns, folk songs, and original compositions from Ernst and Falzone. Wayfaring was featured at the 2016 Hyde Park Jazz Festival in Chicago, the 2017 Earshot Jazz Festival in Seattle, and released their debut recording, I Move, You Move, in Fall 2017 on the Allos Documents label to much critical acclaim.

Clarinetist, composer, and improviser James Falzone is an acclaimed member of the international jazz and creative music scenes, a veteran contemporary music lecturer and clinician, and an award-winning composer who has been commissioned by chamber ensembles, dance companies, choirs, and symphony orchestras around the globe. Educated at Northern Illinois University and New England Conservatory, James is also a respected educator and scholar and has been on the faculty of The School of the Art Institute of Chicago, Deep Springs College, North Central College, and was a fellow at The Center for Black Music Research. At present James is the Chair of Music at Cornish College of the Arts in Seattle, Washington. more info at: allosmusica.org

Katie Ernst has been described by the Chicago Tribune as “a versatile young bassist who plays in far-flung bands and sings with uncommon delicacy and authenticity” & The Chicago Reader identified her as “one of the brightest lights on Chicago’s jazz scene, and she isn’t close to hitting her creative ceiling.”

Katie is an active bandleader and side-woman in Chicago. Katie composes and performs with the band TWIN TALK, alongside co-leaders Dustin Laurenzi (saxophone) and Andrew Green (drums). Twin Talk’s self-titled sophomore album is out now on ears&eyes Records. Their third studio album will be released in 2019, and the group was featured at the 2014 Chicago Jazz Festival.

“One of the most austerely beautiful recordings of the year sounds very much like a balm for troubled times. Elements of jazz, folk, pop, blues and other genres course through this work, but it’s the long-lined lyricism and pervasive warmth of the music-making that leave the deepest and most lasting impression. ” — Howard Reich, The Chicago Tribune

“Modern jazz history is rife with strong duos, but Wayfaring stands out by channeling ideas from American folk tradition or the church into music that extends well beyond the language of jazz. A stunning record.” — Peter Margasak, The Chicago Reader