An event every week that begins at 8:00 pm on Wednesday and Friday, repeating until Wednesday, August 5, 2020

An event every week that begins at 8:00 pm on Thursday, repeating until Thursday, September 24, 2020 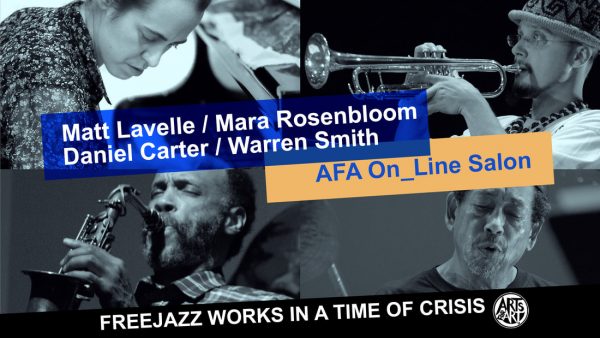 AFA launched the On_Line Salon Series on May 1 on Zoom with saxophonist Tony Malaby and pianist Angelica Sanchez. The livestream series features performances, a conversation with host Patricia Nicholson, and an open Q&A. The concerts are free, but we encourage donations to help fund performer fees.

Luke Stewart is a DC/NYC-based musician and organizer of important musical presentations. He also has a presence in the national and international professional music community. He was profiled in the Washington Post in early 2017 as “holding down the jazz scene,” selected as “Best Musical Omnivore” in the Washington City Paper’s 2017 “Best of DC,” chosen as “Jazz Artist of the Year” for 2017 in the District Now, and in the 2014 People Issue of the Washington City Paper as a “Jazz Revolutionary,” citing his multi-faceted cultural activities throughout DC.

Aquiles Navarro is a New York-based trumpeter, composer and DJ of Panamanian heritage. He considers himself an improviser, coalescing his range of influences into a unified sonic vocabulary that can be incorporated across genre and medium.

Since a young age, Tcheser Holmes naturally wove into the fabric of a tight-knit Pan-African community in Brooklyn centered around the spiritual organization, Ausar Auset Society, and his family’s dance company, The Bennu Ausar Dancers.