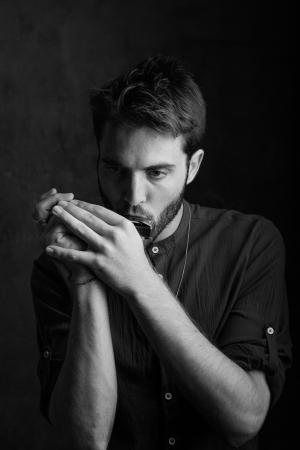 Yotam Ben-Or is a NYC based Israeli-Belgian harmonica player and composer. In August 2014, Yotam moved to NYC after winning a full scholarship to study at The New School for Jazz and Contemporary Music. He formed his quartet in 2015 joined by some of the leading emerging artists of the NYC jazz scene. The group performed at prestigious venues and festivals such as: Jazz at Lincoln Center, Carnegie Hall, Bric JazzFest, Cornelia Street Cafe, to name a few, and toured Europe, Israel, and the Americas. Yotam recorded for the album ‘All Original’, by bassist Avishai Cohen (2013), received annually the America-Israel Cultural Foundation scholarships for Jazz (2013-16), and participated in the Betty Carter Jazz Ahead at The John F. Kennedy Center, directed by pianist Jason Moran (2015). Yotam collaborated with artists and bands such as: Sonex, Iogi, Franco Pinna and more. In June of 2018, Yotam and his quartet released their debut album ‘Sitting on a Cloud’, featuring Yotam’s compositions. In early 2022 they will release their second album, Endless”. https://www.yotambo.com

Gabriel Chakarji is a young pianist and composer from Caracas Venezuela. He grew up in a multicultural environment full of music that expands from afro-Venezuelan Folk, Caribbean, Brazilian music to Jazz and Gospel. In his teens, he took part of the Simon Bolívar Jazz Big Band touring with this orchestra to New York and Boston in 2011. His experience, versatility, and passion made him one of the most sought-after pianists in his country. His participation in the Album “Tiempo” of Linda Briceño earned him a nomination for the Latin Grammy Awards in 2013.At age 21 Gabriel moved to New York with a scholarship to study at the New School for Jazz and Contemporary Music under the guidance of great masters of jazz and improvised music like Reggie Workman, George Cables, Billy Harper and Jane Ira Bloom. He quickly became active in the scene of the city performing in venues like Dizzy’s Club, Blue note, Smalls Jazz Club, Smoke Jazz Club, Fat Cat, Cornelia Street, BonaFide, Subrosa, etc. In 2016 he performed at the late night set at the Blue Note duo with Gadi Lehavi after Chick Corea and Herbie Hancock’s duo set. https://gabrielchakarji.com

Alon Near is an Israeli-based bass player, currently residing in New York, where he is working as a bass player in various bands, after graduating the “New School For Jazz” with an Honorary Degree. Amongst many others, Alon has played with Kurt Rosenwinkel, David Liebman, multi Grammy Award Winner Billy Childs and his Quartet and Eli Degibri, whose Henri & Rachel’s CD earned him a DownBeat “5 starts”. Alon has also attended the prestigious “Berklee Workshops” Led by terry Lynn Carrington, was awarded a full scholarship to Berklee College of Music, won first prize in the “Rostov Jazz Competition”. https://www.instagram.com/bassaloni

Franco Pinna started his musical career as a drummer and percussionist in 1988 in Tucumán, Argentina where he performed and recorded with some of the most prominent musicians of the country. In 1998 , Franco moved to Boston to attend Berklee College of Music , where he obtained the “Outstanding Musicianship” scholarship and graduated Magna Cum Laude. Since he moved to New York in 2004, he has worked as a sideman , playing a wide variety of rhythms and has recorded more than 70 albums accompanying many artists around the globe. He has also taught South American rhythms in various  seminars. https://www.instagram.com/francopinnamusic.Satla is a the first single of Yotam Ben-Or’s upcoming EP entitled Endless https://www.youtube.com/watch?v=lv6zOhUKa6o&t=1s