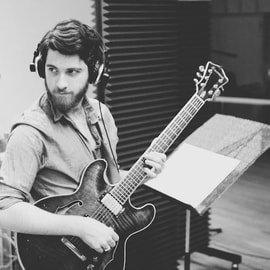 Zakk Jones is a Columbus, Ohio based guitarist, composer and teacher, currently finishing his Bachelor’s degree in Jazz Studies at Capital University. Originally from Portland, Oregon, his participation on the piano in the Fear No Music project led to a National Award in composition at the age of 11.

First influenced on guitar by rock and metal, he now plays Jazz, Classical, Fusion and Brazilian styles. In Columbus, he has performed at Brother’s Drake Meadery, Victory’s, Hal & Al’s, Natalie’s Coal Fired Pizza, Dick’s Den, Scarlet & Grey, Columbus Performing Arts Center, Columbus Jazz & Ribs Festival, and many art galleries, weddings, and corporate events. Opportunities have taken him all across Ohio, with summer gigs in Port Clinton and even further to Atlanta and Dallas for the Jazz Education Network Conference where he has been a performer and stage manager.

Zakk regularly performs with the group Wake Fold, his own trio and quintet, as well as many other projects in the Columbus area. At Capital, he has studied with Stan Smith and Brett Burleson, also have the opportunities to take lessons with Corey Christiansen and Adam Rogers. Besides performing, Zakk also teaches privately, enjoys composing/arranging, and scholarly research. Recently, Zakk has been influenced by the music of Ed Bickert, Chris Potter, Moacir Santos, and Franz Schreker.